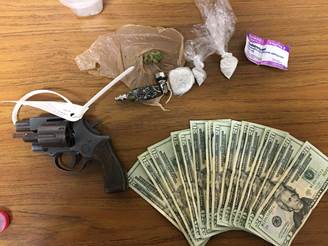 Man behind bars after a narcotics investigation

INDIANAPOLIS – An Indianapolis man has been arrested after a narcotics investigation conducted by the Indianapolis Metropolitan Police Department (IMPD).

On Wednesday, January 25, 2017, Northwest District Narcotics and Flex team officers were called to assist the Marion County Community Corrections with a home visit in the 1200 block of Edgemont Avenue.  While conducting a check of the residence, officers located several. narcotics.  The search was ended.  Officers applied and were granted a search warrant for the residence.  Officers seized several items from the residence.

After the narcotics had been seized, officers placed 28-year-old French Mason under arrest without incident.  Mason was preliminarily charged with Possession of Cocaine and Maintaining a Common Nuisance.  Mason was transported to the Arrestee Processing Center by the Marion County Sheriff’s Office.  The Prosecutor’s Office will review the case and make a final charging decision.

I play on the radio from 7 am -1 pm weekdays on 98.9 FM WYRZ and WYRZ.org. Follow me on twitter @WYRZBrianScott or e-mail me at brian@wyrz.org.
Previous Donnelly Holds Farm Bill Listening Session with Indiana Farm Bureau
Next Man shot to death on Indianapolis’ southeast side