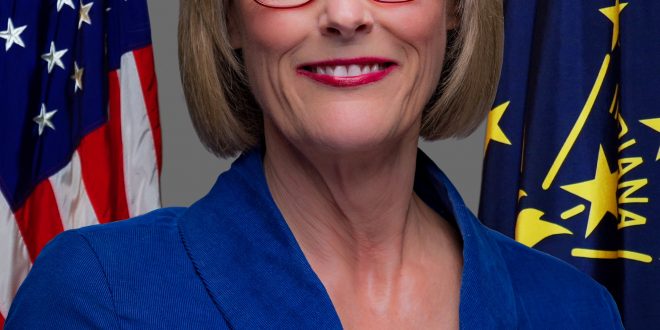 Lt. Governor Suzanne Crouch announced today that she has appointed Danielle Chrysler, an experienced Hoosier military professional and public servant, as Director of the Indiana Office of Defense Development (IODD). She has served the State of Indiana in several roles prior to this appointment.

Chrysler served the Daniels/Skillman administration as Chief of Staff and Deputy Chief of Staff for former Lt. Governor Becky Skillman. In addition, she served as Legislative Director, Scheduling and Operations Officer to Governor Mitch Daniels as well as Chief of Staff to former First Lady Cheri Daniels. Chrysler’s first role in the Statehouse was as Senior Legislative Assistant and Policy Analyst for the House of Representatives.

Her most valuable contribution, according to Lt. Governor Crouch, however, is her service in the Indiana National Guard 215th Area Support Medical Company. “Her heart for service, coupled with her motivation to excel and her intense Hoosier pride are characteristics that I admire and am proud to bring to leadership on both the state and national stage.”

As Director of IODD, Chrysler will lead initiatives to grow Indiana’s business opportunities in the defense industry working in partnership with the Indiana Economic Development Corporation.

“Indiana is a national leader in developing and building new technologies that are used around the world to keep our country safe,” said Elaine Bedel, president of the Indiana Economic Development Corporation. “Just last year, Indiana companies were awarded $3 billion in contracts from the Department of Defense. With Danielle’s help, we look forward to working with enterprising Indiana companies to grow that figure even higher and help our defense industry create more high-wage Hoosier jobs across the state.”

Chrysler previously led the Indianapolis based National Center for Complex Operations as COO and President, an organization she previously served as a Board appointee under two administrations.

“Danielle has the background to make a tremendous contribution to the state, and I welcome her back,” Governor Eric J. Holcomb said.

“It is a distinct honor and privilege to have been given this opportunity to continue in service to the people of Indiana and our great nation,” said Chrysler. “I firmly support the Governor and Lt. Governor’s vision of repositioning Indiana as a thought and action leader in our nation’s defense. I look forward to assisting our great state’s leadership in seizing the opportunities that lie ahead.”

She holds a Bachelor of Arts degree in Political Science from Butler University and a Masters of Business Administration from Indiana Wesleyan University.