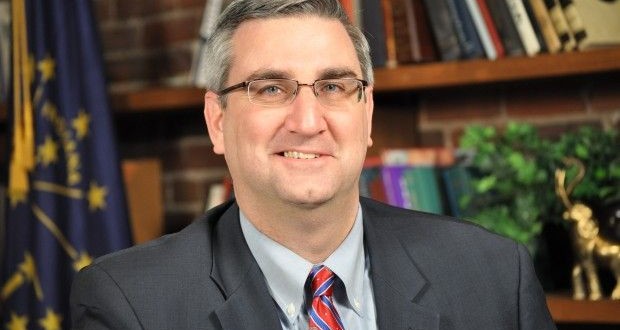 INDIANAPOLIS – Lt. Governor Eric Holcomb today officially filed his candidacy to seek the Republican nomination for Governor of Indiana. The filing was made with both the Indiana Republican Party and the Indiana Secretary of State’s Election Division.

“I am officially running for Governor to continue Indiana’s progress. “As. Lt. Governor, an advisor to Governor Mitch Daniels during his eight years in office, Indiana Chief of Staff to Senator Dan Coats and state chairman of the Indiana Republican Party, I’ve consistently worked with Hoosiers in every corner of the state as we’ve balanced budgets, lowered taxes and made major investments in our infrastructure.

“I remember where Indiana was 12 years ago – unable to pay our bills, fix our roads, retain talented Hoosiers and unprepared for the needs of a dynamic 21st Century economy.

“We can’t afford to turn the clock back. We need an Indiana that is prepared for the future and always growing.

“I was honored to answer Governor Mike Pence’s call to serve as Lt. Governor. And as our next Governor, I will answer the call to keep Indiana moving forward.”

For more information about Lt. Governor Holcomb, you can visit www.HolcombforIndiana.com

I play on the radio from 7 am -1 pm weekdays on 98.9 FM WYRZ and WYRZ.org. Follow me on twitter @WYRZBrianScott or e-mail me at brian@wyrz.org.
Previous Rokita Announces Candidacy for Governor
Next DNR confirms black bear report in southern Indiana