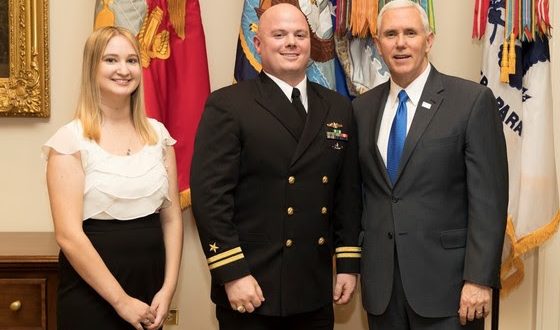 Vigo County—ISP Master Trooper Hans Nowak of the Putnamville Post, recently received news from his son that would make any father extremely proud. His son, US Naval Officer Lt. Hans A. Nowak II, was part of a contingent of officers invited to the White House by President Donald Trump and Vice President Mike Pence. In part, to recognize Lt. Nowak as a Junior Officer of the Year for 2016.

In early April, the 12 officers who emerged from the rigorous JOOY (Junior Officer of the Year) process and their significant others spent a week in Washington, D.C., meeting senior military leaders at the Pentagon, congressmen at Capitol Hill, and the President and Vice President at the White House. “Having our wives with us was extremely important,” said Lt. Nowak. “The sacrifice Nicole has made overshadows anything I have done.” According to Lt. Nowak, Vice President Pence welcomed the group in the Roosevelt Room at the White House and showed his Hoosier Pride by immediately calling out for the couple from Indiana. “It was an honor meeting Vice President Pence. He was extremely welcoming.” At that point, the JOOYs did not know they were going to meet the President. “We only thought we were going to meet the Vice President, but at the end of our talk with him, he said that the President was expecting us in the Oval Office. To say we were excited would be an understatement”, stated Lt. Nowak. The JOOYs and their significant others were then invited into the Oval Office to meet and take pictures with President Trump. “I would not be where I am today without the sailors I have been honored to lead. They are the foundation for all my accomplishments and enabled me to meet the President. The experience was amazing. My sailors are amazing”, commented Lt. Nowak.”

What does it take to be selected as a Submarine Junior Officer of the Year (JOOY) from approximately 1,000 junior officers? According to Undersea Warfare Magazine, you need to have experienced leadership, keen intellect, and an unwavering tenacity outstanding enough to win the nomination from your submarine crew and endorsement from your submarine’s commanding officer. Then you need to demonstrate complete mastery of nuclear power, mariner skills, and the tactical employment of your submarine. Finally, you need to be selected by your squadron commodore. Lt. Hans A. Nowak II, a native of Terre Haute, earned the title of JOOY for 2016. He and his wife Nicole, also a native of Terre Haute, were recently recognized for their service and sacrifice by being invited to the Oval Office to meet the President of the United States.

Lt. Nowak was born in Terre Haute, Indiana to Hans and Kristi Nowak. In 2008, he graduated from Terre Haute North Vigo High School and reported to the United States Naval Academy in Annapolis, Maryland, where he double majored in Applied Mathematics and Quantitative Economics. After earning his commission as a Nuclear Submarine Officer in 2012, he began his nuclear training in Charleston, SC. He attended Nuclear Power School, a graduate-level school focused on advanced nuclear power theory, and then completed a Submarine Officer Leadership School. After graduating at the top of his class, Lt. Nowak reported to the ballistic missile submarine USS TENNESSEE (SSBN 734).

Lt. Nowak amassed numerous accomplishments and accompanying accolades in his professional career aboard USS TENNESSEE. In 2016 alone, Lt. Nowak received an award for excellence in project management, graduated at the top of his Nuclear Engineer Officer School class, certified as a Nuclear Engineer, received the 2016 Submarine Communications Award, improved the submarine in fourteen critical inspection areas, reduced recurring deficiencies in his divisions by 75%, received a Navy Achievement Medal, and completed two deployments, including the longest strategic deterrent patrol in history. His accolades in 2016 ultimately led him to be selected as USS TENNESSEE’s JOOY (Junior Officer of the Year) and subsequently selected by the Commander of Submarine Squadron TWENTY as the JOOY for the entire strategic deterrent waterfront.

Lt. Nowak is married to Nicole Nowak of Terre Haute, Indiana. She graduated in 2011 from Butler University, where she majored in Chemistry and minored in Biology. Hans and Nicole Nowak were married in 2013 and both reside in Cambridge, Massachusetts with their identical twin boys Kaden and Kyan. There Lt. Nowak is teaching engineering courses at the Massachusetts Institute of Technology (MIT) and is the head of Nuclear Programs for MIT, Harvard, and Tufts. He plans to attend graduate school while stationed in Cambridge.