As released by the Lions: 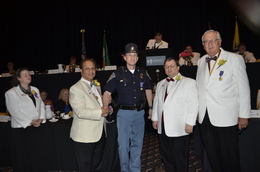 Lions Clubs International is the world’s largest service organization representing 1.4 million members in over 200 countries. There are over 9,000 Lions in clubs throughout Indiana.

The Leadership medal exemplifies dedicated service to the citizens of Indiana, but especially to the youth of Indiana.  As the director of the Vincennes Indiana State Police-Lions Law Camp, “Lion” Sgt. Dunn embraces the Lions Clubs International’s motto of “WE SERVE” through the ”Power of Action,” the “Power of Service” and the “Power of We”, while never forgetting the Indiana State Police Motto “to Serve and Protect.”  Quality leadership is essential to providing quality service to Indiana communities.

I play on the radio from 7 am -1 pm weekdays on 98.9 FM WYRZ and WYRZ.org. Follow me on twitter @WYRZBrianScott or e-mail me at brian@wyrz.org.
Previous Gov. Holcomb Makes Appointments to Various Boards & Commissions
Next American Legionnaires to Fund New Website, Outreach Materials for Sheriffs’ Youth Ranch