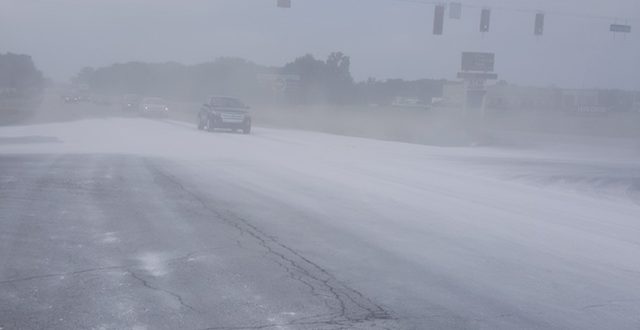 Vigo County—This morning at 9:20, Indiana State Police Commercial Vehicle Enforcement Trooper Mark Overpeck witnessed a northbound US 41 tractor-trailer attempt to stop for a red light at Harlan Drive. During the sudden stop, a large amount of powdered lime spilled over the top of the trailer onto the northbound lanes of US 41. 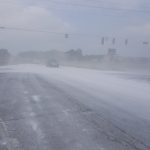 Initially, traffic was moved into the passing lane and minutes later, the northbound lanes of US 41 and the eastbound and westbound lanes of Harlan Drive were closed to begin clean up.

The driver was John Forsting, age 46, of Greensburg, IN. He was driving a 2009 Kenworth pulling a dump trailer loaded with lime for Laudick Trucking of Sunman, IN. Trooper Overpeck cited Forsting for leaking cargo onto roadway.

Hazardous materials teams from Honey Creek Fire/Rescue, Terre Haute Fire Department, and Indiana Department of Homeland Security were called to clean up the lime with a suspected Sulphur additive.

I play on the radio from 7 am -1 pm weekdays on 98.9 FM WYRZ and WYRZ.org. Follow me on twitter @WYRZBrianScott or e-mail me at brian@wyrz.org.
Previous Fleeing Wrong Way Driver Arrested in Vigo County for DWI
Next Indiana Conservation Officer Dustin Whitehead receives national recognition for excellence