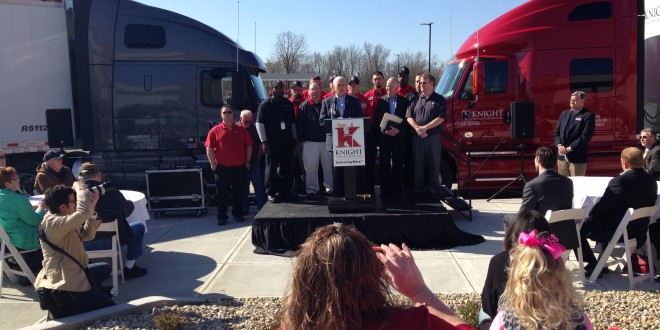 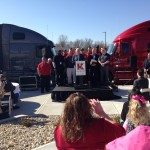 “As the Crossroads of America, Indiana is the crucial link connecting millions of Americans across the nation to the goods they need,” said Governor Mike Pence. “Indiana is home to thousands of highway miles, award-winning airports and a state line that’s more than half water. We continue to make unprecedented investments in state and local infrastructure to support businesses like Knight Transportation, which in turn are driving Indiana’s economy and creating quality jobs for Hoosiers.”

The Phoenix, Arizona-based company has invested $4.62 million into the 25-acre former Indy Park Ride & Fly campus at 3875 Plainfield Road in Plainfield. Knight Transportation renovated the site to serve as an operations center for its customers throughout the Indianapolis and Chicago markets, as well as a regional recruiting and training center where Knight Transportation will train drivers based throughout the Eastern U.S. Upgrades at the facility include doubling the size of the office on its campus, building a 20,000-square-foot truck maintenance shop, constructing a truck wash and fueling station, and upgrading all exterior and building lighting to energy-efficient LED lights. The company’s new facilities now cover 34,000 square feet and the site more than triples the acreage of its former facility on Indianapolis’ southwest side. Following seven months of construction, the company moved its operations to the new site in January.

Knight Transportation currently employs 5,500 associates across the country, including more than 125 employees in Indiana. The company is currently hiring driving associates, mechanics and entry level managers. Interested applicants can apply online at www.driveknight.com or by contacting Ryan Holloway, a recruiter for Knight Transportation’s Indianapolis operations, at 317.390.1346.

“When Knight Transportation selected this site for our new office after almost 20 years in Indianapolis, we needed a location that could support our growth and was part of a larger development plan that would put us closer to our valued customers and employees,” said Dave Jackson, president and chief executive officer of Knight Transportation. “Our location in Plainfield puts us in close proximity to many of our customers and easy access to the interstate system and the city of Indianapolis. Our state-of-the-art service center and maintenance facility is located in the heart of Plainfield’s warehousing and logistics sector, which is quickly becoming the place to be in the Indianapolis metro area for both our customers and transportation providers. We are excited to be part of this area, where high quality business both large and small are locating to take advantage of the growth opportunities in the area and the state.”

With its larger facility, Knight Transportation now has space for future growth of its divisions and business lines, with plans to eventually manage more than 500 trucks at its Plainfield facility. The Plainfield-Indianapolis Regional Operations Service Center is one of 35 locations across 24 states for Knight Transportation, which was named one of North America’s Most Trustworthy Companies by Forbes in 2014.

“Plainfield is pleased to host the regional recruiting and training center for Knight Transportation and its operations center serving customers in the Indianapolis and Chicago markets,” said Robin Brandgard, president of the Plainfield Town Council. “Knight’s reputation for trustworthiness and its knowledge of the transportation and logistics market made it a natural fit for Plainfield. Plainfield has over 35 million square feet of warehouse space under roof, and our location provides easy access to major interstate highways, the Indianapolis International Airport, and the CSX intermodal railyard. We are confident that by locating here, they have chosen the right place to grow their business and train their employees for the future. Knight’s decision will also provide our community with new, high-paying jobs in the transportation industry.”

The Indiana Economic Development Corporation (IEDC) offered Knight Transportation Inc. up to $3,627,000 in conditional tax credits based on the company’s job creation plans. These tax credits are performance-based, meaning until Hoosiers are hired, the company is not eligible to claim incentives. The town of Plainfield approved additional incentives at the request of the Hendricks County Economic Development Partnership.

Companies like Knight Transportation continue to select Indiana for their growth because of the state’s strength as a logistics leader. Known as the Crossroads of America, the state’s logistics industry has earned an A grade from Conexus Indiana and Ball State University’s Center for Business and Economic Research for the past five years. Indiana is the national leader in interstate access, is home to the world’s second largest FedEx air hub and is third in the nation in total freight railroads.

I play on the radio from 7 am -1 pm weekdays on 98.9 FM WYRZ and WYRZ.org. Follow me on twitter @WYRZBrianScott or e-mail me at brian@wyrz.org.
Previous Coats, Donnelly ask HUD to Adopt New Definition of RVs
Next Time is Running Out to File Individual Income Taxes for Free