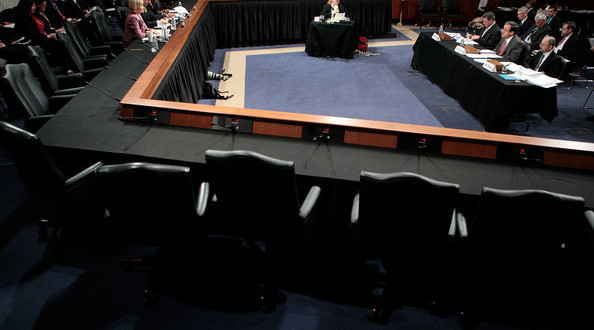 Joint Economic Committee to Economic Report of the President

“The greatest threat facing our economy is the continued reluctance of this president to put our fiscal house in order,” said Senator Coats. “In just 10 years, mandatory spending and interest on our debt will consume 99 percent of all federal revenues. The Economic Report of the President focuses on economic inequality as a defining challenge of the 21st century, but the report fails to recognize that intergenerational theft also is a form of inequality.”

“The Economic Report of the President paints an overly optimistic picture of our current and future economic situation and fails to acknowledge the consequences of the administration’s own policies on economic growth. There’s no mention about how our growing debt, increasing nearly $8.5 trillion since President Obama took office, puts a drag on our economy, holds down growth and limits opportunity,” said Congressman Tiberi. “We’ve entered a prolonged stage of low growth that persists nearly seven years after the recession ended and is predicted to continue for years to come. That’s unacceptable.  To see the economic growth we need to bring confidence back to American families and businesses, we must address our broken tax code, reduce unnecessary regulations on job creators, and reduce our debt.”

The ERP is an annual report written by the Chairman of the Council of Economic Advisers that summarizes the nation’s economic progress. By law, the Joint Economic Committee is required to issue a response to the ERP.

Findings in the 2016 Joint Economic Report suggest that the ERP ignores several important economic realities, among them:

·         The economy is still in the midst of the weakest post-1960 recovery on record. If GDP had grown at the average rate for post-1960 recoveries, real Gross Domestic Product (GDP) would be nearly $2 trillion higher than it is now.

·         Rising national debt – expected to reach 155 percent of GDP within 30 years – will have detrimental effects on investment, interest rates, productivity and wages.

·         The jobs gap compared with the average post-1960 recoveries stands at six million. Many workers are still underemployed, the length of time needed to complete a job search is still too long and wage growth remains anemic.

·         Two of the primary trust funds used to provide certain Social Security and Medicare benefits will be exhausted by 2030 and 2026, respectively. Another major driver of spending increases is the Affordable Care Act, a law with costs that are grossly underestimated.

·         The non-competitiveness of the U.S. tax system, which has the highest combined rates among developed nations, continues to drive companies overseas and punish companies that repatriate funds into the United States.

I play on the radio from 7 am -1 pm weekdays on 98.9 FM WYRZ and WYRZ.org. Follow me on twitter @WYRZBrianScott or e-mail me at brian@wyrz.org.
Previous IMPD Investigators are investigating the death of an unidentified male in the 900 blk. of Oakland Ave.
Next State Sen. Pete Miller statement regarding the Senate’s passage of House Bill 1337, which would enact various pro-life measures in Indiana