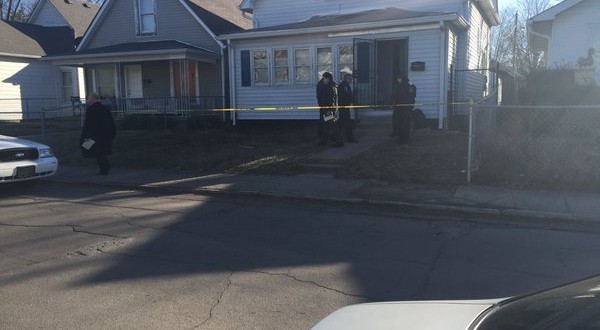 IMPD Investigators are investigating the death of an unidentified male in the 900 blk. of Oakland Ave.

INDIANAPOLIS – Detectives with the Indianapolis Metropolitan Police Department are investigating the death of an unidentified male in the 900 blk. of Oakland Ave.

Just before 8:30 a.m., officers with the Indianapolis Metropolitan Police Department were sent to the 900 blk. of Oakland Avenue on a report of a burglary with a injured person.  When officers arrived they found the unidentified person suffering from a stab wound.  EMS personnel arrived and pronounced the male deceased.

The house has several different rooms that are being rented out, but at the time of this incident only two occupants were known to be home    Detectives have taken those two cooperating individuals (male directly involved and female not involved) down for questioning.  No arrest have occurred and the investigation is on-going at this time.  Detectives will question the involved people and review the physical evidence to determine what they believe occurred but at this time, no motive has been established.

The Marion County Coroner’s Office will determine a manner of death and positively identify the victim after a scheduled autopsy has been performed. The investigation is on-going at this time and as more information becomes available this release may be updated.

I play on the radio from 7 am -1 pm weekdays on 98.9 FM WYRZ and WYRZ.org. Follow me on twitter @WYRZBrianScott or e-mail me at brian@wyrz.org.
Previous Coats Highlights Millions in Unverified Purchases at State Department, FAA
Next Joint Economic Committee to Economic Report of the President