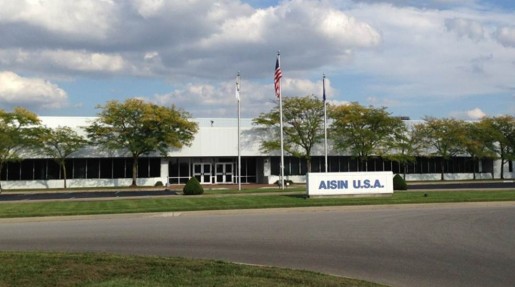 Seymour – Aisin USA Manufacturing, a Japan-owned manufacturer of automotive parts, announced plans today to expand its operations in Jackson County, creating up to 100 new jobs by the end of 2018.

“Indiana is home to the largest concentration of manufacturing jobs in the nation because we are a state that works,” said Governor Mike Pence. “Here in Indiana, we have balanced our budgets, cut costs and taxes, and reduced burdensome regulations that stand in the way of growth, allowing job creators to add nearly 150,000 Hoosier jobs since 2013. Manufacturers, both large and small, are growing across the state, and we are proud to support companies like Aisin USA Manufacturing as we work together to ensure quality employment for all Hoosiers.”

The company, which is a subsidiary of Kariya, Japan-headquartered Aisin Seiki Co., will invest more than $99.9 million to expand its manufacturing operations at 1700 E. Fourth St. in Seymour. Aisin USA Manufacturing, which manufactures automotive components and systems, such as door frame components, latching systems, seating and trim molding, must renovate and purchase new equipment in order to accommodate design changes being incorporated by its customers. The company, which supplies parts for vehicles such as the Honda Odyssey, Chevy Traverse, Toyota Highlander, Toyota Camry, Toyota Avalon, Toyota Corolla, Toyota Rav 4 and Lexus models, plans to begin work on upgrades in late 2016.

Aisin USA Manufacturing employs more than 1,700 full-time Hoosiers at its Seymour facility and plans to begin hiring for manufacturing positions in 2017. Interested applicants can apply by emailing a resume to hr@aisinusa.com or by completing an application in person.

“Aisin USA is excited to expand and continue its operations in Seymour, Indiana,” said Jeff Nordman, executive vice president of Aisin USA Manufacturing. “Aisin USA was the first North American manufacturing facility for our parent company, Aisin Seiki, and we have enjoyed a long and mutually beneficial relationship with Seymour and Jackson County.”

Aisin Seiki, which is part of the Toyota Group, designs and manufactures automotive and industrial parts as well as lifestyle and energy products. The company is one of the top five global automotive suppliers, producing a variety of parts including transmission, brake, engine and IT units. Aisin employs more than 83,000 people across the world, including approximately 2,900 in Indiana. Including Aisin USA Manufacturing, Aisin has 10 companies in Indiana, including Aisin Drivetrain in Crothersville, Aisin Chemical Indiana in Crothersville, ATTC Mfg. in Tell City, ADVICS in Terre Haute, Aisin Logistics in Franklin, and INTAT Precision in Rushville.

“For nearly 30 years, Aisin USA has been one of our most important companies, and we obviously are pleased that they continue to invest here,” said Seymour Mayor Craig Luedeman. “This is great news, and we pledge our support to them.”

Today’s news comes on the heels of Governor Pence’s jobs and economic development mission to Japan in September 2015, where he met with executives of Aisin Seiki. Indiana is home to more than 260 Japan-owned business facilities that support more than 53,000 Hoosier jobs. Among all U.S. states, Indiana has the largest amount of Japanese investment per capita and is the only state with three Japanese automotive original equipment manufacturer (OEM) companies – Subaru, Toyota and Honda.

The Indiana Economic Development Corporation offered Aisin USA Manufacturing up to $500,000 in conditional tax credits based on the company’s job creation plans. These tax credits are performance-based, meaning until Hoosiers are hired, the company is not eligible to claim incentives. The city of Seymour approved tax abatement for the first phase of the project last night at the request of the Jackson County Industrial Development Corporation.

I play on the radio from 7 am -1 pm weekdays on 98.9 FM WYRZ and WYRZ.org. Follow me on twitter @WYRZBrianScott or e-mail me at brian@wyrz.org.
Previous National Foods Producer Setting up Shop in Boone County, Creating 150 New Jobs
Next Long-term Unemployed and Underemployed Hendricks County Residents Eligible for Free Job Training, Placement Services