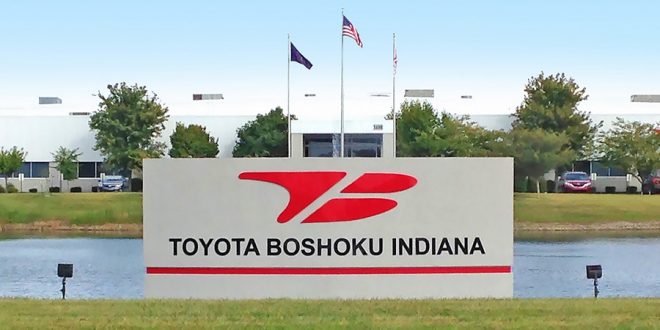 Indianapolis – Toyota Boshoku Indiana, an automotive component manufacturer, announced plans today to expand its production operations here, resulting in the creation of up to 160 new jobs.

“International companies like Toyota Boshoku Indiana are helping to drive growth in Indiana’s economy today,” said Governor Mike Pence. “As a leading manufacturing state, Indiana is attracting global companies that need an affordable, low-tax state to build their products. That’s especially true of Japanese manufacturers like Toyota Boshoku, which together provide more than 53,000 quality jobs for Hoosiers across the state. These global businesses could add jobs anywhere, but they are choosing Indiana because we have built a state that works.”

The company, which is a subsidiary of Japan-based Toyota Boshoku Corporation, will invest $10.59 million to construct and equip a 42,000-square-foot addition to its manufacturing facility at 1698 S.100 West in Princeton. With its expansion, Toyota Boshoku Indiana’s operations will grow to 524,000 square feet across 57 acres and the company will begin producing vehicle seats and doors for the Toyota Highlander. Toyota Boshoku Indiana currently produces interior seat systems for the Toyota Sienna and manufactured seats for 147,620 vehicles just last year.

“Toyota Boshoku Indiana is committed to our community here in southern Indiana, where our strong team is helping build vehicle seats and doors for cars traveling on roads around the world,” said Brian Malinao, plant president of Toyota Boshoku Indiana. “Indiana’s committed manufacturing workforce, as well as our close proximity to Toyota’s automotive assembly facility here in Princeton, makes this the perfect location for our global company to add these new jobs. Our team members take pride in knowing they play an important role in making vehicles safe and comfortable for their family, friends and neighbors.”

Launching operations in Indiana in 2007, Toyota Boshoku is a global automotive systems manufacturer. A member of the Toyota Group, Toyota Boshoku operates more than 90 facilities around the world, including 19 across North and South America. The company’s growth in Indiana is driven in part by Toyota Motor Manufacturing Indiana’s continued success in Princeton, where the company assembled more than 375,000 units of the Toyota Highlander, Highlander Hybrid, Sienna and Sequoia just last year. After consolidating Highlander production to Gibson County in 2012, TMMI has announced expansions three of the last four years.

The Indiana Economic Development Corporation offered Toyota Boshoku Indiana LLC up to $900,000 in conditional tax credits and up to $200,000 in training grants based on the company’s job creation plans. These incentives are performance-based, meaning until Hoosiers are hired, the company is not eligible to claim incentives. Gibson County approved additional incentives at the request of the Gibson County Economic Development Corporation.

“We are very excited Toyota Boshoku Corporation in Japan targeted Gibson County with another round of capital investment and thus an expansion of their Gibson County plant,” said Jeremy Overton, president of the Gibson County Council. “We realize the tax abatement valued at $505,000 our council provided and the proposed Tax Increment Financing District, valued at $1.4M to Toyota Boshoku, are vital for the growth of jobs and additional investment in our community.  The Toyota Boshoku team, under the direction of President Brian Malinao, have become one of our county’s largest and most generous employers. We thank them for their commitment to their team members and our county.”

Since January 2013, 42 Japan-based companies have committed to locating or expanding their operations in Indiana, announcing plans to invest more than $2 billion into Indiana and create 6,160 new Hoosier jobs. As the only state that is home to three Japanese automotive assembly facilities – Subaru, Toyota and Honda – Japanese companies are responsible for more than 53,000 jobs across the state. Among all U.S. states, Indiana has the largest among of Japanese investment per capita.

I play on the radio from 7 am -1 pm weekdays on 98.9 FM WYRZ and WYRZ.org. Follow me on twitter @WYRZBrianScott or e-mail me at brian@wyrz.org.
Previous Commemorative Torch Relay poster contest open to Hendricks County Artists
Next Byway Brewing Co. Sweeps 18th Indiana Brewers’ Cup