Clay County—On Monday, September 25, 2017, Indiana State Police detectives from the Putnamville Post were contacted by a rural Greencastle (Putnam County) resident about a theft. The victim reported his Rugar .357 magnum and Rugar .44 magnum were stolen by a juvenile known to the family.

The juvenile was reported as a runaway and located later on Monday in Brazil by the Brazil Police Department. The juvenile led ISP investigators to a remote area in Clay County where the .357 was recovered. The .44 handgun was sold to an adult. ISP detectives located the adult, and ultimately the handgun in possession of another adult, who relinquished the weapon to ISP.

The 15-year-old male juvenile was incarcerated in the Vigo County Juvenile Detention Center awaiting court action in Clay County. Charges are pending on an adult male in Clay County in relation to receiving a stolen weapon. 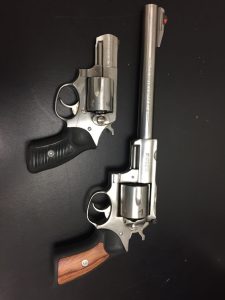 I play on the radio from 7 am -1 pm weekdays on 98.9 FM WYRZ and WYRZ.org. Follow me on twitter @WYRZBrianScott or e-mail me at brian@wyrz.org.
Previous GOVERNOR HOLCOMB DECLARES SEPTEMBER 24-30, 2017 RAIL SAFETY WEEK
Next MAPLE ELEMENTARY NAMED AS A NATIONAL BLUE RIBBON SCHOOL