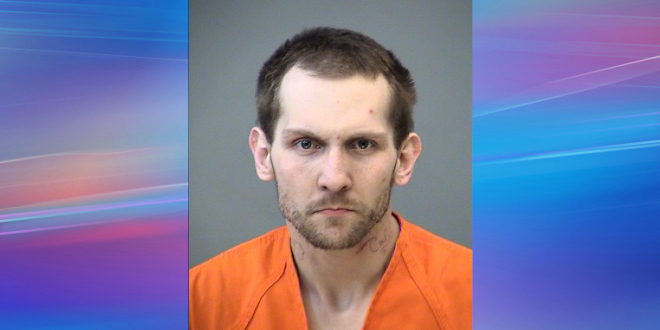 INDIANAPOLIS –  Just before 7:00 a.m., on Sunday, February 2, 2020, Indianapolis Metropolitan Police Department (IMPD) East District officers attempted to stop a 2004 gray Pontiac 4 door for failing to dim headlights while traveling eastbound on E.10th St. The Recruit Officer along with the Field Training Officer activated the overhead lights on the marked police vehicle and tapped the siren to get the drivers attention to pull over. The driver started to pull over at E. 10th St and N. Lasalle St.  The driver allegedly fled in the vehicle and the officers pursued the vehicle to the intersection of S. Lasalle St /Moore St. The driver of the 2004 gray Pontiac then stopped the vehicle in the middle of the street, exited the driver’s door and let the vehicle roll south through the intersection into a fence. It is alleged, the driver turned and faced the officers, raised a black pistol and fired at least one shot at the officers before they could fully exit their vehicles from 20 to 25 feet. The officers returned fire. A second officer who was assisting during the traffic stop and his civilian rider, were in a marked police vehicle directly behind the officers during the time of the shooting.

Officers made apprehension of 24-year-old Dillion Ray Grant a short distance from the shooting scene. Dillion Grant was unarmed at the time of apprehension. A search for the weapon was conducted with negative results. No one was injured by the shooting.

Dillion Grant and the passenger of the 2004 gray Pontiac 4 door were transported to the Homicide office where they were both interviewed.  The passenger was interviewed and released. Dillon was arrested and preliminarily charged with four counts of Attempt Murder and Serious Violent Felon. The Marion County Prosecutors Office will review the case and make a charging decision.

As is standard procedure in an officer-involved shooting, IMPD’s Internal Affairs Unit is conducting a parallel investigation to ensure compliance with departmental policy. The involved officers will be placed on Administrative Leave as the investigation is conducted, and will have access to IMPD’s wellness program for coping assistance during this time.

I play on the radio from 7 am -1 pm weekdays on 98.9 FM WYRZ and WYRZ.org. Follow me on twitter @WYRZBrianScott or e-mail me at brian@wyrz.org.
Previous IndyGo maximizes remainder of Red Line budget; plans two more corridor improvements
Next Weekend ramp closures at the North Split