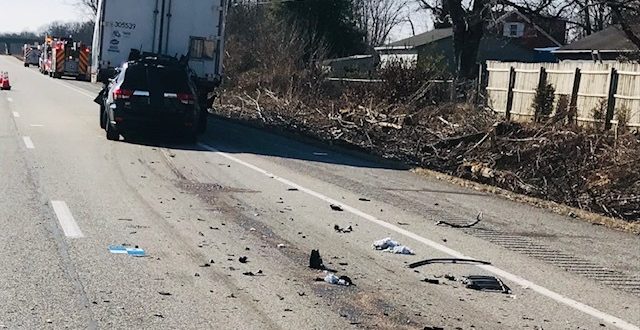 Vigo County –  The Indiana State Police are investigating a Sunday afternoon crash between a passenger vehicle and a semi tractor-trailer near the one mile marker on Interstate 70 westbound, that claimed the life of one individual.

Preliminary investigation by Trooper Nicole Cheeks indicated that traffic was slow in the area due to an earlier accident in Illinois at the 148 mile marker.  Traffic was being diverted off the Interstate at the 154 mile marker which is the first exit inside of Illinois from the Indiana state line.  At approximately 2:07 p.m., a 2012 Volvo semi tractor-trailer driven by Sergiy S. Shadrin, 54, of Newmarket, Ontario, was traveling westbound on Interstate 70 in the driving lane near the state line with its hazard lights activated because of slow traffic.  Shadrin stated he felt an impact in the rear of his semi and immediately stopped.  A 2011 Jeep was traveling westbound in the driving lane directly behind the semi tractor-trailer and failed to observe slowed traffic, running into the rear of Shadrin’s semi-tractor trailer.  The driver of the Jeep succumbed to injuries at the scene of the accident.

An autopsy is scheduled for tomorrow afternoon at Regional Hospital in Terre Haute.  At that time a positive identification of the driver of the Jeep will be made.

Drugs and alcohol are not believed to be a contributing factor of the accident.

I play on the radio from 7 am -1 pm weekdays on 98.9 FM WYRZ and WYRZ.org. Follow me on twitter @WYRZBrianScott or e-mail me at brian@wyrz.org.
Previous ORV accident in Morgan County leaves two people injured
Next Are You a Tax Preparer? DOR Has Helpful Tips for You