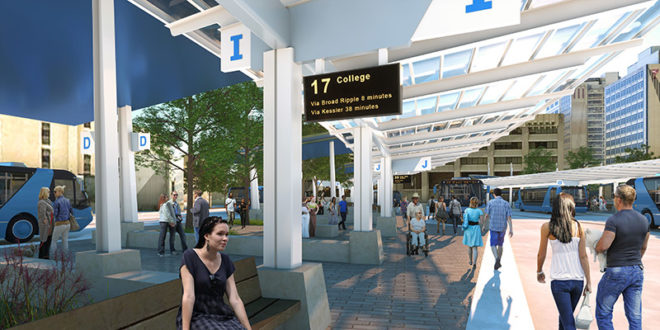 INDIANAPOLIS, IN (June 21, 2016) – Today’s opening of the Julia M. Carson Transit Center is another key milestone in the push for modern mass transit in Indianapolis, according to the Indy Chamber. The group represents nearly 2,000 local employers, part of a widespread coalition of corporate, civic and social services groups campaigning for improved transit service connecting people, businesses and neighborhoods across the city.

The Julia M. Carson Transit Center creates an efficient downtown hub for the IndyGo bus system. The region’s first rapid transit route, the Red Line, begins construction next year and will eventually connect Carmel and Westfield to Greenwood through the Transit Center. Finally, Indianapolis voters will have the chance to endorse the Marion County Transit Plan for improved service in the November 8th election.

According to Indy Chamber President & CEO Michael Huber, the rapid succession of events – federal funding of the Red Line, the opening of the Transit Center, and the fall referendum – comes after more than a decade of planning, and creates a unique opportunity for Indianapolis to enhance its business climate and quality of life.

“We congratulate IndyGo and the City of Indianapolis for their foresight in developing the Julia M. Carson Transit Center,” said Huber. “Downtown transfers have crowded riders onto busy sidewalks and created confusion and delays. The Transit Center is necessary today, and even more critical as we build a better system around it.

“The Red Line is the next step toward this vision, bringing rapid transit to hundreds of thousands of people and jobs and improving millions of annual trips along a heavily-populated corridor. But these projects work best as part of a city-wide system that helps people get to work, brings new investment to our neighborhoods and offers independence to residents without reliable transportation.”

The Indy Chamber has endorsed the Marion County Transit Plan as a realistic blueprint for expanded bus and rapid transit service, and urges voters to support it by voting yes on the transit referendum – Question 2 on the November 8th general election ballot.

“The plan invests in a bigger fleet and longer hours, with buses running every day of the week,” noted Mark Fisher, the Indy Chamber’s Vice-President of Policy and Government Relations and an IndyGo board member. “It triples the number of residents who will live within a 5-minute walk of a frequent bus route, and cuts wait and travel times for the typical rider. It makes transit a more convenient, realistic option for how most of us live and work, while meeting the needs of who already depend on it.”

Fisher added that the decision to name the Transit Center after the late Congresswoman Julia Carson also reflected the broader value of transit to Indianapolis.

“Congresswoman Carson spent her career in public service as a tireless advocate for access and opportunity for her constituents,” Fisher finished. “In that spirit, putting more jobs and options for education, healthcare and daily necessities within reach by transit is an investment in self-sufficiency and upward mobility – one that will pay off for all of us.”

I play on the radio from 7 am -1 pm weekdays on 98.9 FM WYRZ and WYRZ.org. Follow me on twitter @WYRZBrianScott or e-mail me at brian@wyrz.org.
Previous Japan’s Largest Steel Producer Adding Operations in Shelby County
Next Coats Statement on Senate Gun Votes