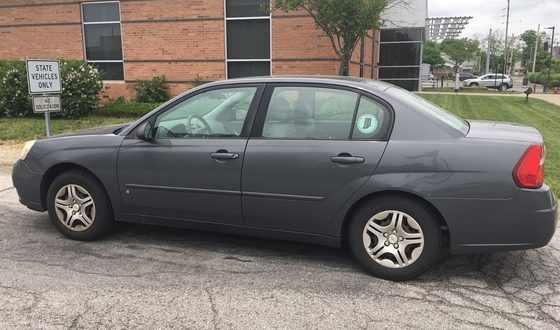 INDOT Vehicle Stolen from Work Zone on I-69 in Fishers

Fishers, IN – Wednesday morning a grey 2007 Chevrolet Malibu, owned by the Indiana Department of Transportation, was stolen from a work zone on I-69 near 116th Street.

Just after 11 a.m. troopers from the Indiana State Police were called to investigate the theft. According to the INDOT employee he parked the car in the work site around 8:00 a.m., noticed it missing around 10:15 a.m. The vehicle was left with the keys inside and unlocked. Contract workers in the zone noticed a white male, described to be in his 30s with short brown hair and a brown sweatshirt driving the vehicle, however they assumed it was an INDOT employee when they saw it pass.

Just before 2:00 p.m. Wednesday, troopers from the Fort Wayne Post located the Malibu abandoned near Fort Wayne Indiana. Investigators are still trying to determine if anything inside the vehicle was taken.

Investigating Officer, Senior Trooper Corey Berfield said, “this is a reminder of the importance locking your vehicle, no matter where you leave it and no matter what time of day.” He went on to say, “this was a brazen crime committed in  plain sight in the middle of the day.”

Troopers will continue the investigation into this incident, there have been no arrests. Anyone with information about this case is asked to call the Indiana State Police at 317-899-8577

I play on the radio from 7 am -1 pm weekdays on 98.9 FM WYRZ and WYRZ.org. Follow me on twitter @WYRZBrianScott or e-mail me at brian@wyrz.org.
Previous Three Central Indiana Innovation Networks Among 11 Groups to Receive Skill UP Grant Funding from DWD
Next Donnelly Helps Senate Pass Measure to Reverse FCC Repeal of Net Neutrality