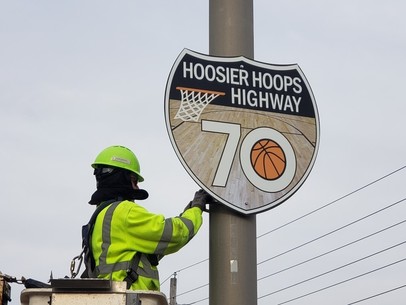 INDIANA – The Indiana Department of Transportation this week began unveiling its “Hoosier Hoops Highway” signs in advance of a busy basketball month in Indiana, with the Big Ten, Horizon League and NCAA tournaments being hosted in the Hoosier State.

Games will be played throughout Indiana in basketball arenas in Indianapolis, Evansville, West Lafayette and Bloomington.  INDOT is placing temporary signs on highways leading to host cities to commemorate the historic month and help guide fans and teams.

Stay Informed
Get updates on INDOT projects and programs via:

I play on the radio from 7 am -1 pm weekdays on 98.9 FM WYRZ and WYRZ.org. Follow me on twitter @WYRZBrianScott or e-mail me at brian@wyrz.org.
Previous Gospel Country Countdown with Les Roberts
Next Construction scheduled to begin March 15 on I-65 Added Travel Lanes project in Boone County