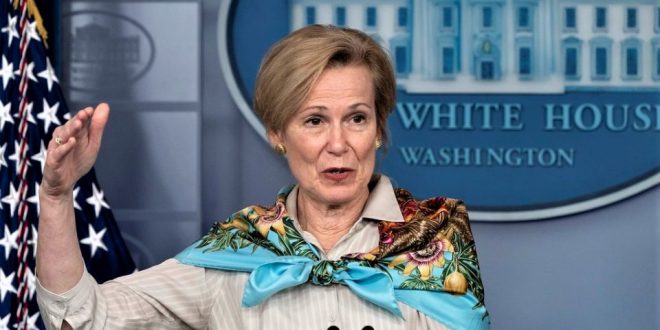 This article was originally published by the Center for Public Integrity, a nonprofit newsroom based in Washington, D.C.

Dr. Deborah Birx, a leader of the White House Coronavirus Task Force, warned state and local leaders in a private phone call Wednesday that 11 major cities are seeing increases in the percentage of tests coming back positive for COVID-19 and should take “aggressive” steps to mitigate their outbreaks.

The call was yet another private warning about the seriousness of the coronavirus outbreaks given to local officials but not the public at large. It came less than a week after the Center for Public Integrity revealed that the White House compiled a detailed report showing 18 states were in the “red zone” for coronavirus cases but did not release it publicly.

Increasing test positivity — an indicator that a community does not have an outbreak under control — should be expected in areas that reopened and grew more relaxed about social distancing measures, said Harvard epidemiologist Bill Hanage. He said the warnings and data from the White House should be made public.

“This is a pandemic. You cannot hide it under the carpet,” he said. “The best way to deal with a crisis or a natural disaster is to be straight with people, to earn their trust and to give the information they need to make decisions for themselves and their communities.”

Birx told hundreds of emergency managers and other state and local leaders that they should act quickly to stem the outbreaks. Among her recommendations were to trace the contacts of patients testing positive for COVID-19 in areas where test positivity is going up.

“When you first see that increase in test positivity, that is when to start the mitigation efforts,” she said in a recording obtained by Public Integrity. “I know it may look small and you may say, ‘That only went from 5 to 5-and-a-half [percent], and we’re gonna wait and see what happens.’ If you wait another three or four or even five days, you’ll start to see a dramatic increase in cases.”

Birx said the federal government was seeing encouraging declines in test positivity in places like Phoenix and San Antonio but warned that the outbreak in the Sunbelt was moving north.

“What started out very much as a southern and western epidemic is starting to move up the East Coast into Tennessee, Arkansas, up into Missouri, up across Colorado, and obviously we’re talking about increases now in Baltimore,” she said. “So this is really critical that everybody is following this and making sure they’re being aggressive about mitigation efforts.”

It’s unclear who heard the warnings and was invited to the call, which was hosted by the White House Office of Intergovernmental Affairs and closed to the press. Baltimore and Cleveland were two of the cities Birx warned were facing rising test positivity, but a spokeswoman for the Cleveland mayor’s office, Nancy Kelsey-Carroll, said they did not participate in the call. And Baltimore health department leaders didn’t know about it, agency spokesman Adam Abadir said in an email. That city today announced a mask mandate and new restrictions on indoor dining.

The test positivity rates may not have been news to some elected officials. For example, Pennsylvania already publicly reports that data by county.

Birx’s warning came a day after President Donald Trump resumed his televised coronavirus briefings. The president offered a rosier picture of the pandemic than Birx, focusing on examples of improvements in the fight against the virus, such as better treatment with the drug remdesivir.

Her call also came the same day that Democratic Senate Minority Leader Sen. Chuck Schumer said on the Senate floor that he and House Majority Leader Nancy Pelosi had insisted on greater data transparency in a meeting with White House Chief of Staff Mark Meadows. Schumer said they would push for legislation to “ensure that COVID-19 data is fully transparent and accessible without any interference from the administration.”

And on Tuesday, former CDC Director Tom Frieden and colleagues released a list of data points they would like states to publish in real-time, standardized, to give officials and residents better information.

“It’s not just people who are holding office who need to make decisions,” said Caitlin Rivers, an epidemiologist at Johns Hopkins University, on a call with reporters. “The more that we can provide information to people to keep themselves and their families safe, the better off we’ll be.”

The White House did not immediately respond to a request for comment on Birx’s warnings, nor did it answer repeated questions over several days from Public Integrity on why it had not made the “red zone” report public. Birx said on the call that the weekly report had been sent to governors for four weeks. One staffer for a governor said his boss received only the section of the report related to his state, not the entire report.