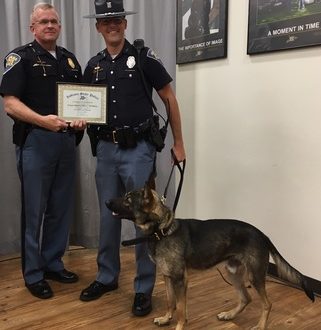 The Indiana State Police Post in Indianapolis added a new K-9 team to the district.  Trooper Jonathan Haugh and his K-9 partner Smitty recently graduated from the K-9 academy in Indianapolis.

The K-9 academy graduates were recognized on August 11, 2017 at the Indiana State Police Museum.  Five state troopers and four officer’s from outside agencies graduated from the school. 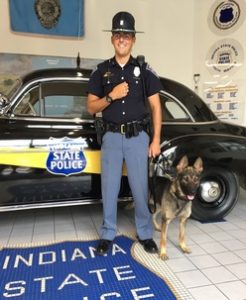 Haugh, a three year veteran of the state police, is a graduate of Indiana State University where he obtained a Bachelor of Science degree in criminal justice.  Since joining the department he has taken on additional duties as a member of the ISP Honor Guard, the Tactical Intervention Platoon and is a Field Training Officer.  Haugh originally patrolled Marion, Johnson, and Shelby Counties, but will now cover all seven counties of the Indianapolis District as a K-9 handler.

His canine partner’s name, “Smitty” was chosen by Haugh to pay homage to ISP Trooper Herbert Smith who was killed in the line of duty just north of Shelbyville, Indiana in 1946.  Haugh explained that he read an article where Herbert Smith was referenced as “Smitty”.  “I thought since ISP is giving me a great opportunity by being one of their K-9 handlers, I could give back a little by naming my canine after a trooper who has given the ultimate sacrifice,” Haugh stated.