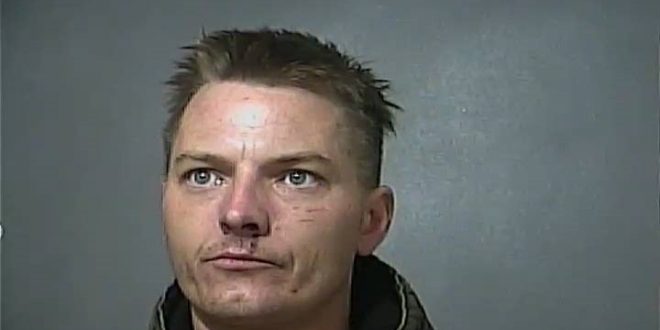 Vigo County – October 17, 2019, at approximately 2:45 p.m., Indiana State Police dispatch advised information of a dark passenger car traveling westbound near the 18 mile marker, that was reportedly driving erratic and that had struck a guardrail earlier on Interstate 70.

Trooper Andrew Mattern observed a passenger vehicle meeting that description near the nine mile marker westbound.  The vehicle was off the interstate, but was located partially on the shoulder, and partially down an embankment, facing south.  The vehicle was occupied by an adult male in the driver’s seat and two children in car seats.  Trooper Mattern observed flames and smoke coming from under the vehicle. Trooper Mattern and Jared Pirtle, of the Vigo County Sheriff’s Department, immediately got the children and the male driver out of the vehicle and Master Trooper Hans Nowak, who had arrived on scene was able to extinguish the fire with a fire extinguisher.

Trooper Mattern spoke to the male driver who was identified as Christopher Mack, age 37, of Indianapolis.  Further investigation by Trooper Mattern revealed, after administering and failing several standard field sobriety tests that Mack was under the influence of a controlled substance.  Mack refused to submit to a certified chemical test and was transported to an area hospital to receive medical clearance.  Upon receiving medical clearance, Mack was then taken to the Vigo County jail where he is currently being held.

The two children were turned over to the Vigo County Department of Child Services and further investigation will be conducted by their department.

All Suspects Are Presumed Innocent Until Proven in a Court of Law.

I play on the radio from 7 am -1 pm weekdays on 98.9 FM WYRZ and WYRZ.org. Follow me on twitter @WYRZBrianScott or e-mail me at brian@wyrz.org.
Previous Governor Eric Holcomb Directs Flags To Be Flown at Half-Staff in memory of U.S. Rep. Elijah E. Cummings
Next Meetings next week will provide I-69 updates