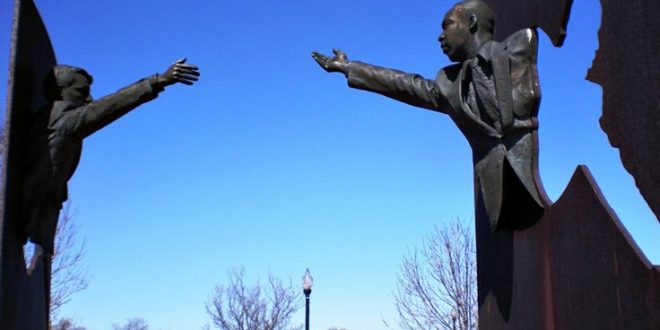 The exhibitions are part of a larger commemoration planned by the Kennedy King Memorial Initiative, to take place later this spring.

From now through April 7, passengers and guests traveling through Civic Plaza can view photographs and stories about Hoosiers who attended Kennedy’s speech that night, read a transcription of the speech, and view a photographic layout of the Landmark for Peace Memorial (located in the Dr. Martin Luther King Jr. Park).

“Sen. Kennedy’s speech provided the right words in a horrific moment, words that lent healing to the people of Indianapolis during a tragedy that scarred the nation,” said Indianapolis Mayor Joe Hogsett. “Across the country, cities erupted in riots that night – but not Indianapolis.

For, on that night, our city’s legacy of peace was born in darkness, at a park in the heart of our city.”

“We are honored with the opportunity to provide these exhibits memorializing the two events, and sharing an important piece of Indianapolis history and insight into Hoosier hearts with those who travel through our airport,” said Mario Rodriguez, executive director of the Indianapolis Airport Authority.

Kennedy’s speech also will be memorialized in a second exhibit featuring Raki Dem’s poem, “I See.” Dem – a Butler Lab School student – partnered with the SALT project, an Emmy Award-winning production company, to capture his performance of the poem honoring Indianapolis’ city-wide recognition of this historical anniversary.

Dem’s performance will remain on display in Baggage Claim and Concourse B through April 10.

The KKMI commemorates both King’s assassination and Kennedy’s speech every year. For the 50th anniversary, the KKMI has planned several other programs honoring these historical events leading up to the official anniversary date on April 4, 2018.

“As we approach the 50th anniversary of Senator Robert Kennedy’s moving speech in Indianapolis announcing Dr. Martin Luther King Jr.’s assassination and prepare to welcome notable dignitaries to Indiana, the addition of this exhibit will allow the thousands of visitors traveling through our world-class airport each day to learn more about this historic moment in our nation’s history,” said State Representative Greg Porter, KKMI board chair.

I play on the radio from 7 am -1 pm weekdays on 98.9 FM WYRZ and WYRZ.org. Follow me on twitter @WYRZBrianScott or e-mail me at brian@wyrz.org.
Previous January Indiana Employment Report
Next Rep. Rokita Releases New School Safety Report, Implores Hoosiers to Get Involved in School Communities