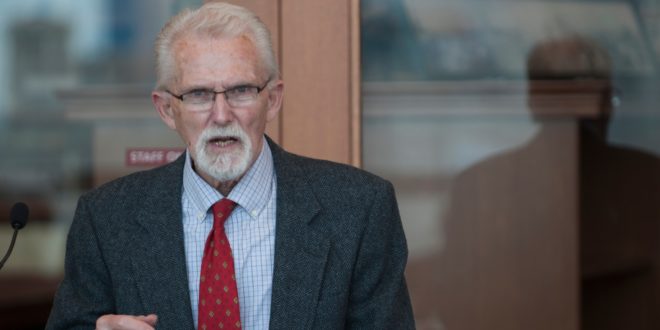 INDIANAPOLIS — A 29-year veteran of the Indiana State Police has committed to fund the largest endowed scholarship in the history of the School of Public and Environmental Affairs at IUPUI.

Marv Smalley, a 1980 SPEA graduate, made the commitment through a bequest that will fund two renewable full-tuition scholarships in perpetuity. The Marv Smalley Indiana State Police Scholarship Fund will support one scholarship, while the second will be funded through the Bicentennial Campaign matching gift program.

The scholarships may be used for undergraduate or graduate programs. Current and retired members of the Indiana State Police, as well as the children, stepchildren, grandchildren and stepgrandchildren of ISP officers, are eligible.

“It was the right thing to do to provide the support and opportunities to Indiana State Police officers and their families,” Smalley said. “This is just a small gesture of my gratitude, given my career and all of the opportunities I received from the Indiana State Police department. But it’s also recognition and payback to SPEA for the support I received from Indiana University and SPEA.”

Following a four-year active-duty stint in the U.S. Air Force, Smalley joined the Indiana State Police as a trooper in 1960. By the mid-1970s, he had worked his way through the ranks to lieutenant when he decided to pursue his bachelor’s degree in criminal justice through SPEA.

“There were other things I wanted to be challenged by in addition to my career,” said Smalley, who knew he wanted to be a state trooper as early as 8 years old and finished his tenure on the force with the rank of major. “Once I became a trooper, I realized the many opportunities available within the department and knew that having a college education would set me up for success in pursuing those opportunities within the Indiana State Police Department. I knew my degree would help me advance in my career.”

During his time with the Indiana State Police, Smalley served as the planning and operational commander for the 1987 Pan American Games, for which Indianapolis was the host city. He would draw on that experience five years later when he joined the U.S. Department of Defense.

From 1992 through 1996, Smalley was the DOD liaison to federal, state and local law enforcement agencies charged with security for the 1994 FIFA World Cup games held in Orlando, Florida, and the 1996 Summer Olympic Games and Paralympic Games in Atlanta. He also served as security director for the Salt Lake Organizing Committee for the 2002 Winter Olympics.

“I sought education from other universities, as well as through advanced certification and select trainings, throughout my career,” said Smalley, who received specialized training with both the FBI and the Secret Service. “But SPEA helped prepare me for my entire career in so many ways. Without my SPEA education, I would not have had as much direction and guidance in the field that shaped my career.”

Lilliard Richardson, executive associate dean of the school, said Smalley’s gift will have a lasting impact on the school and further enhance its ability to compete for the best and brightest students.

“Our mission is to give students the knowledge and skills to have a significant impact in diverse settings, and Marv’s career perfectly embodies the vision we have for SPEA graduates,” Richardson said. “His commitment and generosity to SPEA will have an enduring influence on future generations of public and nonprofit leaders.”

In addition to his scholarship bequest, Smalley will also make a gift to the Indiana University McKinney School of Law Global Crisis Leadership Forum.

I play on the radio from 7 am -1 pm weekdays on 98.9 FM WYRZ and WYRZ.org. Follow me on twitter @WYRZBrianScott or e-mail me at brian@wyrz.org.
Previous Coats Named Champion of Healthcare Innovation
Next IMPD, Gleaners continue partnership to feed Indy’s hungry for second summer