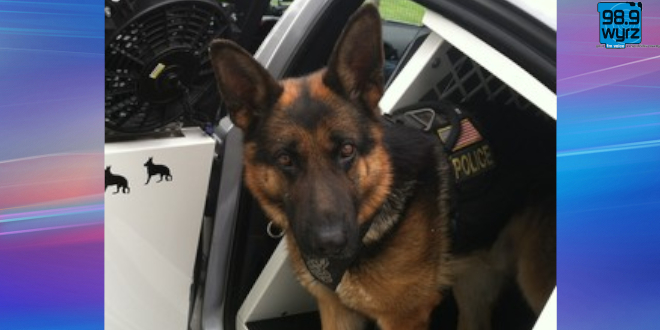 Indianapolis, IN – Indiana State Police K9 Barrett has retired from his patrol duties. Barrett was named after Trooper Daniel Barrett who was killed in the line of duty January 27, 2008. Barrett and his partner, Senior Trooper Matthew Wilson, have patrolled together since 2012 and they are responsible for the seizure of significant amounts of narcotics and the apprehension of violent criminals.

One notable criminal apprehension was in November 2019 when Barrett apprehended the man suspected of shooting and killing Fishers Police K9 Harlej.

Barrett is also responsible for the seizure of:

Trooper Wilson and Barrett spent most of their time patrolling central Indiana as part of a drug interdiction team. Barrett will now spend his retirement with the Wilson Family enjoying some well deserved rest and relaxation.

I play on the radio from 7 am -1 pm weekdays on 98.9 FM WYRZ and WYRZ.org. Follow me on twitter @WYRZBrianScott or e-mail me at brian@wyrz.org.
Previous Avon High School and University of Notre Dame Commit Blake Fisher Set to be Welcomed to 2021 All-American Bowl with Virtual Jersey Presentation
Next Gov. Holcomb Signs Executive Order to Extend Health Care Licensing