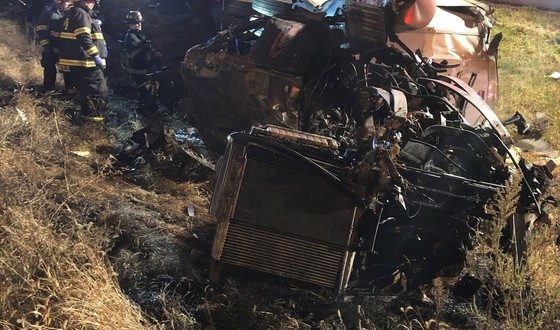 Indianapolis, IN – Troopers from the Indiana State Police were called to a serious crash on I-465 westbound west of Allisonville Road just after 11:00 last night, September 30th. When emergency responders arrived they found a severely damaged semi-tractor trailer in the ditch along the right side of I-465. The semi had struck a large utility pole causing power lines to hang dangerously low to the ground. The driver of the semi was unconscious and unresponsive, despite life saving efforts by the Indianapolis Fire Department and EMS the driver was pronounced deceased at the scene.

Due to the low hanging powerlines and the extensive damage to the utility pole, the ramp from Allisonville Road to I-465 westbound remains closed at this time. Crews from Indianapolis Power and Light are on scene and attempting to fix the damaged pole. Crews from INDOT have assisted by closing the ramps with barricades.

I play on the radio from 7 am -1 pm weekdays on 98.9 FM WYRZ and WYRZ.org. Follow me on twitter @WYRZBrianScott or e-mail me at brian@wyrz.org.
Previous Putnamville State Police Post Safety Tips for Avoiding Deer on the Roadway
Next Gov. Holcomb Announces Indiana’s Infant Mortality Rate Falls to Historic Low