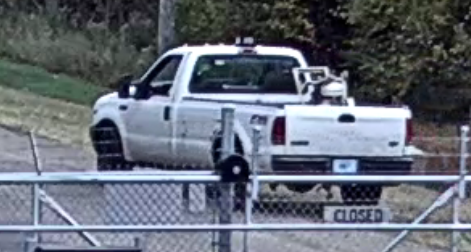 Indianapolis, IN – The Indiana State Police is investigating a theft of equipment from an Indiana Department of Transportation Garage located at 120 Shortridge Road in Indianapolis. On the evening of Friday October 16, 2020, a white male entered the INDOT facility by climbing a fence behind the facility and stole several items. One item stolen was a license plate off the back of an INDOT truck, it is a blue plate bearing number 60077. The suspect then allegedly placed that stolen license plate on the back of the white single-cab Ford pick-up truck in the photos below. The white truck also has an emergency light mounted to the roof. Other tools were also stolen at this time.

Sunday October 18, 2020 the suspect returned to the same INDOT facility and allegedly stole more tools. This time the white male suspect, believed to be the same person from October 16, was wearing a yellow reflective vest and a hard hat driving the same Ford truck.

I play on the radio from 7 am -1 pm weekdays on 98.9 FM WYRZ and WYRZ.org. Follow me on twitter @WYRZBrianScott or e-mail me at brian@wyrz.org.
Previous Report Shows Indiana Has the 6th Slowest Recovery for Weekly Unemployment Claims in the U.S.
Next Hendricks County Sherriff’s Department Investigating the Death of a Man in Avon