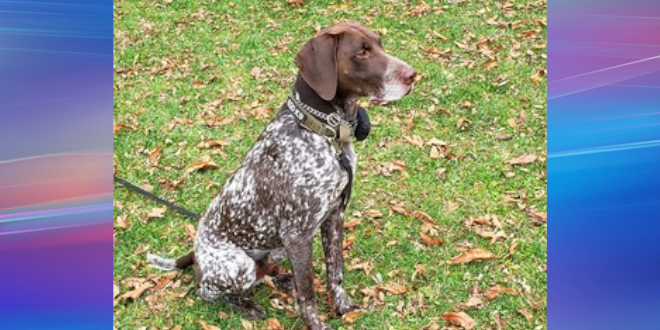 Explosive Detection Canine Rex (pictured right) was acquired by the department in May 2019 and started a 10 week training process culminating in a three day certification process by the International Police Working Dog Association (IPWDA). Rex and Poynter displayed their proficiency in both Phase I, which is an odor recognition test, and Phase II. Phase II is an operational test designed to certify the team in locating explosives in a live environment in different areas they may be required to operate in.

Poynter’s previous canine partner, Mela, passed away on September 13, 2019 due to complications with cancer. During her eight year career, Mela provided security for high profile events like the 100th Anniversary of the Indianapolis 500, the 2012 Super Bowl, and visits to Indiana by U.S. Presidents and other Dignitaries. On average, Mela completed about 300 details a year covering the Indiana State Fair, Indiana Judges Conferences, demonstrations to the public, Notre Dame Football, Indiana University Basketball, and protecting the citizens of the great State of Indiana through routine sweeps of the Statehouse.

I play on the radio from 7 am -1 pm weekdays on 98.9 FM WYRZ and WYRZ.org. Follow me on twitter @WYRZBrianScott or e-mail me at brian@wyrz.org.
Previous I-65 Lane closures scheduled in Boone County Tuesday and Wednesday Night
Next Near Collision With a State Police Commission Lands One in Jail for DUI