INDIANAPOLIS– Lt. Governor Sue Ellspermann today announced that 20 companies from 11 Indiana counties have been named ‘Companies to Watch’ by the Office of Small Business and Entrepreneurship (OSBE).

“I congratulate each of the Hoosier businesses on being selected as one of Indiana’s ‘Companies to Watch’ in 2015,” said Lt. Governor Ellspermann. “In Indiana we celebrate successful companies and commit to policies that support and encourage continued growth. We know that most future job expansion will occur with companies like these being honored. They are already having a positive impact on our economy and we look forward to their greater contributions in the decades to come.”

Presented by the State of Indiana and OSBE and endorsed by the Edward Lowe Foundation, ‘Companies to Watch’ recognizes privately held Indiana businesses that have experienced exceptional growth and are well positioned for even greater growth in the future. Eligible companies must have six to 150 full-time employees and have generated between $750,000 to $100 million in annual revenue or capital.

The 20 ‘Companies to Watch’ were named after evaluating 50 nominations for the awards and represent industries ranging from real estate and construction/manufacturing to information technology and food services.

During 2014, these chosen companies had combined revenues in excess of $196 million and created 148 new jobs. This represents an increase of 27.5% from 2013. Projecting continued growth through 2015 includes a 23% revenue increase and 16% job growth for the standout companies.

The 2015 ‘Companies to Watch’ will be honored at a ceremony at the Indiana Roof Ballroom in Indianapolis on August 27. Tickets for the dinner and ceremony are available at www.inctw.org and questions may be emailed to Noelle Dunckel at NDunckel@osbe.in.gov. 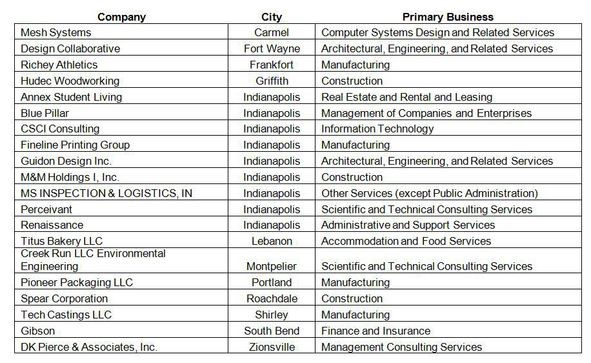 I play on the radio from 7 am -1 pm weekdays on 98.9 FM WYRZ and WYRZ.org. Follow me on twitter @WYRZBrianScott or e-mail me at brian@wyrz.org.
Previous A Sensible Long-Term Fix for the Highway Trust Fund
Next Governor Pence Thanks National FFA Organization for Relocating National Convention & Expo to Indianapolis