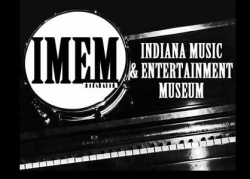 The first IMEM Film Series event is Friday, December 11, 7 pm at the Wheeler Arts Community Theater at 1035 Sanders Street in Fountain Square, Indianapolis.  The program is curated and hosted by renowned film preservationist Eric Grayson and features “A Christmas Wish” aka “The Great Rupert”, a 1950 Christmas family comedy starring Jimmy Durante.  The program also includes a rare short featuring Indianapolis footage post World War 1 and a vintage, rarely seen cartoon.  All are projected on actual vintage film.  Admission is $5 at the door. Beverages and snacks will be available.

IMEM is now accepting donations of historical music, film, and broadcasting artifacts, along with monetary donations.  Donations are tax deductible.

This is the fourth major event held by IMEM in 2015.  Previously IMEM hosted a pop-up exhibit in April, an open house and display at the Marion County central library in August, and a music fest at The Vogue Theater in September.

Imagine being able to stroll into a museum and be able to listen to, view and discover Indiana music, film and broadcasting history.  The founders of the museum are working diligently to help make this a reality.  Find out more about how you can help at imemindiana.org or on Facebook at facebook/imemindiana.