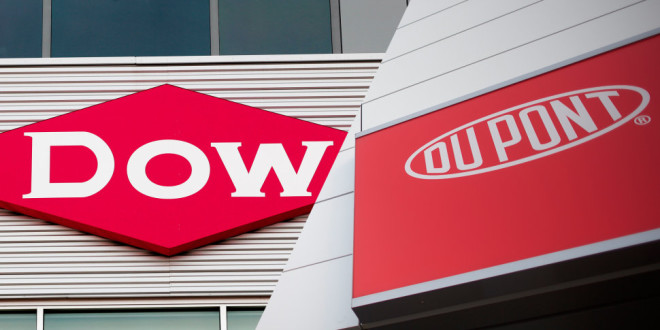 The corporate headquarters for the Agriculture company will be located in Wilmington, Delaware, and will include the office of the CEO and key corporate support functions. Sites in Indianapolis and Johnston, Iowa, will also serve as Global Business Centers, with leadership of business lines, business support functions, R&D, global supply chain, and sales and marketing capabilities concentrated in the two Midwest locations.

“Dow and DuPont have played integral roles in shaping the success of Indiana’s economy, and we are proud that Indiana will play a key role in their new future,” said Governor Mike Pence. “Hoosier farmers have driven innovation in agriculture that radiates throughout the state, advancing research, growth and job creation across industries like life sciences and technology. I’m grateful for the confidence that Dow and DuPont have placed in our people and for the collaboration with city officials that made this exciting announcement possible. With the announcement of this Global Business Center for the new DowDuPont, Hoosiers can be assured our state will continue to play a leading role in the future of this exciting new company.”

“We were impressed by the commitment put forth by the city and state and their focus on maintaining a hub of innovation in Indianapolis,” said Tim Hassinger, president and CEO of Dow AgroSciences. “We have a proud history of being part of this community for more than 26 years. Being a Global Business Center for the new Agriculture company maintains a strong focus on agricultural R&D innovation in Indiana and near our customers. We thank the local, state and federal officials for their efforts in working through this process.”

Indianapolis is currently home to Dow AgroSciences on the city’s northwest side. With quality, high-paying jobs, the company offers highly-skilled, competitive employment for Hoosiers across its research and development, sales and marketing teams. With the establishment of this global business center, long-term revenue and commensurate employment are expected to grow in Indianapolis.

“I am grateful that the merger includes a continued, sustained presence in Indianapolis, and am optimistic about the further growth of DowDuPont in our community,” said Indianapolis Mayor Joe Hogsett. “We look forward to ongoing conversations with their management team, and will be aggressive in our efforts to attract even more jobs to Indianapolis.”

Announced in December 2015, the DowDuPont merger is expected to close during the second half of 2016, subject to shareholder and regulatory approvals. The new company plans to establish three independent, publicly traded companies focused on agriculture, material science and specialty products after the merger close.

I play on the radio from 7 am -1 pm weekdays on 98.9 FM WYRZ and WYRZ.org. Follow me on twitter @WYRZBrianScott or e-mail me at brian@wyrz.org.
Previous Routine Commercial Vehicle Inspection Nets Fraudulent Credit Cards
Next IMPD Detectives seeks the whereabouts of a suspect from a 2015 murder