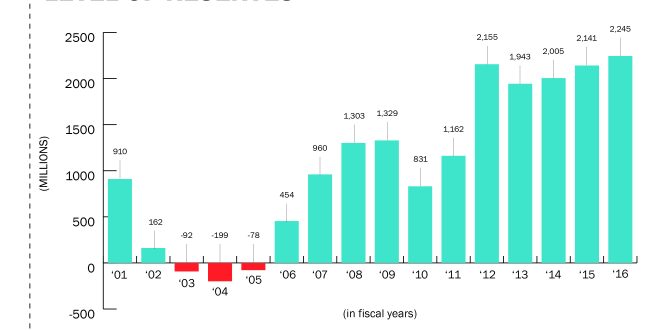 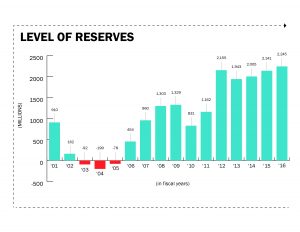 The report shows that the state ended FY 2016 with a structural surplus of $50.6 million, despite revenues that were below forecast, primarily because of low gas prices. Reserves are at the highest amount ever in Indiana, at more than $2.24 billion. This was achieved in spite of the fact that Indiana’s total revenue growth in FY 2016 is $111.3 million below the most recent, downward revised forecast and $78.5 million below actual revenue collected in FY 2015.

“Hoosiers should be encouraged that Indiana’s financial record remains strong and their tax dollars are being used wisely,” said Governor Mike Pence. “In the last year, we provided additional funding to strengthen Indiana’s roads and bridges, prioritized education, and bolstered regional collaboration and economic development by investing in our Regional Cities Initiative. We are able to cut taxes while still funding our priorities and maintaining our highest reserve level yet because of our prudent fiscal management and commonsense policies.” 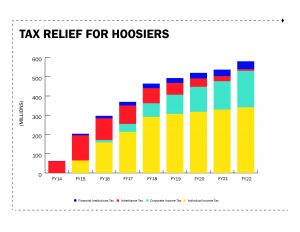 “Hoosiers deserve to know their hard-earned dollars are being spent in a responsible manner,” said Lieutenant Governor Eric Holcomb. “In Indiana, every tax dollar is spent with serious consideration and respect for the individuals who earned those dollars. By keeping prudent reserves and identifying areas of potential growth, we can continue to make Indiana a fiscal leader.”

“Serving as Indiana’s Chief Financial Officer, my office accounts for and reports on our state’s income and expenditures,” said State Auditor Suzanne Crouch. “By operating with a balanced budget and living within our means, Indiana has maintained strong reserves as well as our AAA credit rating. Focusing on maximizing efficiency and ensuring every dollar is spent in a transparent and accountable manner, I’m proud to report back to hard-working Hoosiers that once again, Indiana remains a model of fiscal integrity.”

The Governor signed into law the biennial budget for fiscal years 2016-2017 on May 7, 2015. The budget is honestly balanced, holds the line on spending, reduces state debt, and maintains reserves while also making historic investments in education, innovation, and reform.

I play on the radio from 7 am -1 pm weekdays on 98.9 FM WYRZ and WYRZ.org. Follow me on twitter @WYRZBrianScott or e-mail me at brian@wyrz.org.
Previous Former Ovation CFO receives suspended sentence for securities fraud
Next Hendricks County Officially Names its 24 Bicentennial Torchbearers