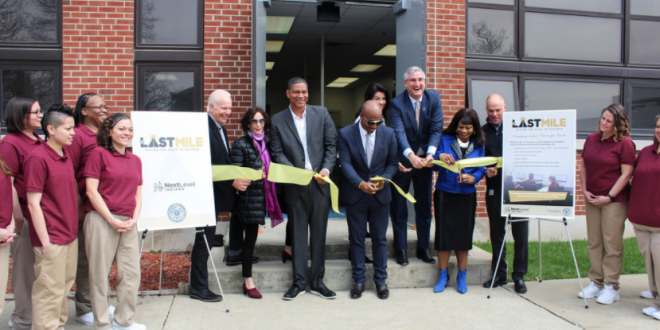 INDIANAPOLIS – Today at the Indiana Women’s Prison, Gov. Eric J. Holcomb and First Lady Janet Holcomb participated in a ribbon cutting to mark the start of a new program called The Last Mile, which will teach a class of women offenders at the facility valuable coding skills they can use in the working world upon release. The Holcombs were joined by Indiana Department of Corrections Commissioner Rob Carter, The Last Mile Program founders, The Last Mile Board Member MC Hammer and 14 members of the inaugural coding class.

“This is one of those days when I am bursting with pride to be Indiana’s governor,” Gov. Holcomb said. “The Last Mile program is a great example of what we can do when the public and private sectors work together to take Indiana to the next level, and I cannot wait to be back here when these ladies graduate—with valuable skills and ready to begin the first mile of their new journeys upon reentering society.”

The Last Mile (TLM) was created in 2014 to equip offenders with relevant job skills to propel them into tech careers when they are released from prison. Indiana will be the first state outside of California to adopt this successful coding program. The Last Mile class members learn web programming languages, such as HTML, CCS and JavaScript. Beyond these technical coding skills, they are also learn about how businesses function, working as a team, giving and accepting constructive criticism, building confidence, and how to pivot when they are heading in the wrong direction.

The Last Mile program is currently operating in five correctional facilities in California—a state that claims 10 percent of the entire incarcerated population of the United States. There, 100 percent of graduates of The Last Mile secure employment upon release—with a 0 percent recidivism rate. Currently the Indiana’s correctional facilities house about 27,000 offenders in 23 state prisons—and more than 90 percent of them will eventually be released back into Hoosier communities. Among formerly incarcerated adults in Indiana facilities, there is a 37 percent recidivism rate in the first three years after being released.

I play on the radio from 7 am -1 pm weekdays on 98.9 FM WYRZ and WYRZ.org. Follow me on twitter @WYRZBrianScott or e-mail me at brian@wyrz.org.
Previous USDA Announces Funding Strategy to Combat Opioid Addiction in Rural America Based on Donnelly’s Bipartisan Package
Next Joint State Investigation Finds Monroe County Man Jailed Following February Fire