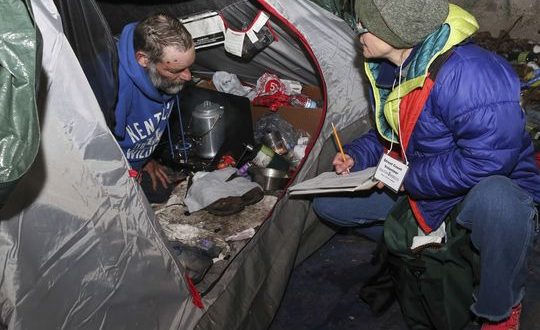 INDIANAPOLIS – The Indiana Housing and Community Development Authority (IHCDA) released today statewide findings from the 2016 Point-in-Time (PiT) Homeless Count. Findings include a 1% decrease in overall homelessness and a significant decrease in individuals, families and veterans identified as being chronically homeless.

“We are pleased at the continued decrease in our state’s homelessness, which is now down 10% since 2010,” said Lt. Governor Eric Holcomb, who serves as the IHCDA Board Chair. “Through the Housing First initiative that focuses on providing permanent, affordable housing as quickly as possible, we are supplying Hoosiers with both housing and the supportive wraparound services needed in order to avoid returning to homelessness.”

Taking place on Wednesday, January 27, 2016, the Point-in-Time Homeless Count is a requirement by the U.S. Department for Housing and Urban Development (HUD) for every community receiving federal funds for programs to aid the homeless. The decrease in Indiana’s homeless population can be attributed to initiatives aimed at increasing the amount of permanent supportive housing and rapid rehousing programs, including the U.S. Department of Veterans Affairs’ Supportive Services for Veteran Families (SSVF) program and the HUD-Veterans Affairs Supportive Housing (HUD-VASH) program.

Another program is the Indiana Permanent Supportive Housing Initiative. Launched in 2008 to further the strategy to end long-term and recurring homelessness, the program provides technical assistance to teams in the areas of selecting tenants, planning services and employing housing first and harm reduction approaches. Since the initiative launched, it has helped to support over 1,400 permanent supportive housing units in Indiana.

Additionally findings from the 2016 PiT include:

Indiana’s Point-in-Time Homeless Count takes place on a yearly basis, with Indiana Balance of State Continuum of Care & IHCDA, the Coalition for Homelessness Intervention and Prevention (CHIP) and the South Bend Continuum of Care conducting counts covering all 92 counties.

While the amount of federal allocations is not directly based on the findings of the Point-in-Time Homeless Count, HUD considers the outcomes and justifications for upwards and downward swings as additional information for tracking purposes and future strategies on how to house persons permanently.

I play on the radio from 7 am -1 pm weekdays on 98.9 FM WYRZ and WYRZ.org. Follow me on twitter @WYRZBrianScott or e-mail me at brian@wyrz.org.
Previous Group Fundraising Opportunities Available at the Indiana State Fair
Next Coats Statement on Collins, Johnson Gun Amendment Votes