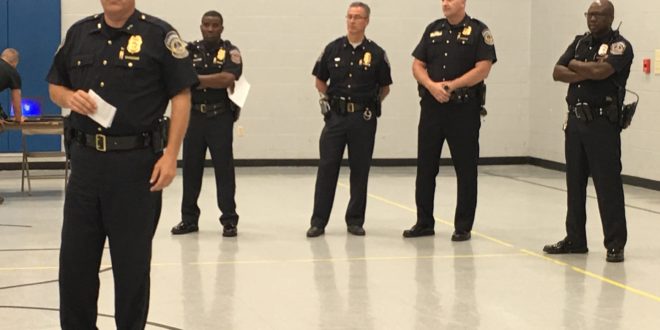 INDIANAPOLIS – Twenty-six known offenders and drug dealers were taken into custody Saturday during the largest operation in IMPD history. Working in partnership with federal, state and local partners, more than 150 officers targeted homes around Indianapolis in three areas – North, East and Northwest Districts. The neighborhoods were selected based on an analysis of the social disorder index, which includes narcotics related homicides, aggravated assaults, crime reporting and other criminal activity.

Dubbed Operation First Step, the purpose of the initiative was to support the strategic vision of reducing crime, reducing the fear of crime and enhancing public safety.

“This operation had two goals – one was the short term impact of removing these people from the streets but the other was the long term impact of gathering information to build cases,” IMPD Chief Troy Riggs said. “But, we aren’t stopping here. This is just the first of many such operations geared toward reducing the instances of violent crime by addressing contributing factors.”

In addition to the arrests, 13 grams of heroin, 8.5 grams of cocaine and marijuana, four guns, $3,500 in cash and three cars were seized. Some other operation highlights – one of the men arrested on a narcotics warrant had a $1 Million bond; a grow operation was found; and 92 bottles of gin, 23 bottles of vodka, and 182 cans of beer were found at a bootlegging operation.

Operation First Step, which also included members of the clergy and wraparound services for those in need, had three distinct goals

I play on the radio from 7 am -1 pm weekdays on 98.9 FM WYRZ and WYRZ.org. Follow me on twitter @WYRZBrianScott or e-mail me at brian@wyrz.org.
Previous Glenda Ritz Nominated for Second Term as Superintendent of Public Instruction
Next Japan’s Largest Steel Producer Adding Operations in Shelby County