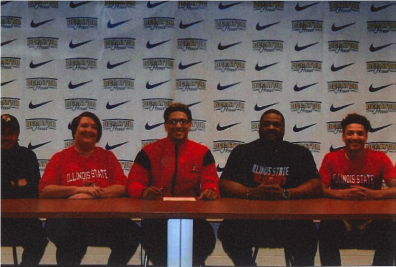 Bryce Jefferson being only six years old asked his mother, Jeanna Jefferson if he could play football.  She could not afford the football program in the township they lived in and had to say “not this year”.  The following year she researched and found the IMPD PAL club youth football program.  Bryce started playing with the PAL club football league at age 7. She knew immediately this was a sport Bryce loved.  Bryce played football for the PAL club until he turned 13. These years were a great experience for him.  Bryce was introduced to great leaders, mentors, and coaches that saw his potential and helped him develop on and off the field.  Bryce was very successful and credits his success to the PAL staff and their mentoring.

Bryce continued to play football for Perry Middle School during his 7th and 8th grade years and then onto Decatur Central High School.  He was the starting quarterback for his freshman team and continued to excel as the starting quarterback through his senior year. With Bryce at the helm, he helped the Hawks to a 10-2 record and passed for 2,027 yards and 24 touchdowns during his sophomore and junior year.  He continued his success during his senior year rushing for 1,322 yards and 18 touchdowns.

Bryce came back to the PAL football league banquet to share his story and inspire young athletes.  He let kids know to follow their dreams and that they too, can become a success.

Bryce Jefferson is a phenomenal example of the importance of the IMPD PAL club.  The foundation that children are taught in their younger years will guide them through life.

If you would like volunteer and/or have your child participate in the PAL club, please contact the Community Engagement Office at (317) 327-3187.

I play on the radio from 7 am -1 pm weekdays on 98.9 FM WYRZ and WYRZ.org. Follow me on twitter @WYRZBrianScott or e-mail me at brian@wyrz.org.
Previous When Do Vehicle Crashes Happen? This Interactive Site Will Tell You; Learn Even More at the MPH Data Day on March 6, 2018
Next Retired Indiana State Police K9 ‘Mojo’ Passed Away