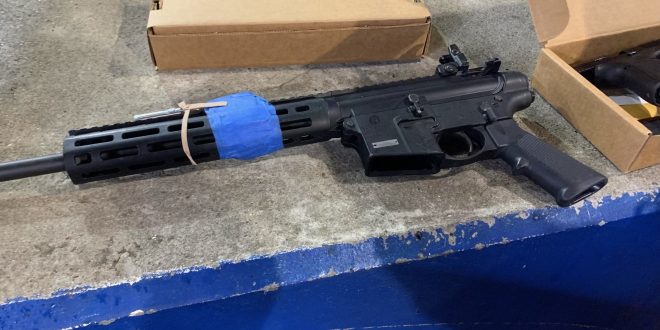 IMPD Officers Make Several Firearm Arrests Over this Past Weekend

On Saturday, June 11, 2022, at approximately 1130 pm, officers working the Incident Analysis Center (IAC) were observing cameras for criminal activity in the downtown and canal areas. Those officers knew of a disturbance (trouble with juveniles) in the 100 block of W. Maryland Street. While observing live camera footage, Incident Analysis Center (IAC) officers observed a group of juveniles. One who the officer believed to be in possession of a firearm. Incident Analysis Center (IAC) officers were able to relay that information to responding officers. Subsequently, IMPD Downtown District Officers and Special Event Team (SET) came into contact with the group and encountered one juvenile with an apparent “bulge” in his left pant leg in the shape of a rifle. Officers removed the rifle from the juvenile and identified him as a 16-year-old, and he was taken into custody without further incident. Officers on the scene also arrested a 15-year-old juvenile who was in dangerous possession of a firearm and was taken into custody without further incident. Both juveniles were transported to the Marion County Juvenile Center.

On Saturday, June 11, 2022 IMPD Southwest District Violence Reduction Team & Violent Crimes Task Force were conducting an investigation in the 5700 block of Wilkins Street which has had multiple shots fired runs when they observed a wanted subject get inside of a vehicle. Officers conducted a felony stop on the vehicle and detained the occupants inside. After obtaining a search warrant for the vehicle a firearm was located. The wanted suspect identified as 20-year-old Sao Sorsor Jr. who was wanted for felony burglary and unlawful possession of a firearm by a serious violent felon. Also arrested was 18-year-old Lemuel Gathing for carrying a handgun without a license possession of cocaine, and possession of marijuana.

As a result of that investigation on Sunday, June 12, 2022, IMPD Southwest District Violence Reduction Team & Violent Crimes Task Force executed a search warrant in the 2300 block of Hoyt Avenue with the assistance of an IMPD K-9 unit. The residence had been the subject of multiple shots fired runs. During the search of the residence, five loaded handguns and three loaded rifles were seized. As a result of the investigation 21-year-old Josiah Twitty was arrested for dealing in marijuana and 42-year-old Randall Hill unlawful possession of a firearm by serious violent felon.

On Sunday June 12, 2022 at approximately 9:35 pm an IMPD Southeast District officer initiated a traffic stop in the 1600 block of South State Street. The vehicle failed to stop for the officer and a short vehicle pursuit ensued. The vehicle pursuit came to an end when the suspect crashed the vehicle in the 900 block of E. Maryland Street. The driver bailed from the vehicle fleeing from officers however was apprehended a short time later without further incident. The driver later identified as a 15-year-old juvenile was arrested for resisting law enforcement and dangerous possession of a firearm. A 16-year-old passenger inside the vehicle was also arrested for dangerous possession of a firearm.

An arrest is merely an accusation, and the suspects are presumed innocent until and unless found true.

IMPD will continue to target violent crime and those who illegally possess firearms. Reducing violence crime is a top priority for the agency and building community partnerships.

Anyone with information about these incidents can call Crime Stoppers of Central Indiana at 317.262.8477 or (TIPS) to remain anonymous. Citizens can also download the mobile P3tips app for Apple or Android phones to submit a mobile tip or go to www.CrimeTips.org [crimetips.org] to submit a web tip. You will remain anonymous and may be eligible for a cash reward of up to $1000 if the information leads to a felony arrest. Only tips submitted directly and anonymously to Crime Stoppers are eligible for these cash rewards.

I play on the radio from 7 am -1 pm weekdays on 98.9 FM WYRZ and WYRZ.org. Follow me on twitter @WYRZBrianScott or e-mail me at brian@wyrz.org.
Previous Search underway in Monroe Lake for missing Springville man
Next Be Aware of Online Puppy Scams