INDIANAPOLIS – Indianapolis Metropolitan Police Department (IMPD) officer was struck and injured by gunfire, after a suspect fled from an investigative traffic stop on city’s northwest side.

Just after 6:37 p.m. on 07/25/2016, a one year veteran officer with the IMPD, conducted an investigatory traffic stop on a vehicle in the Marathon Gas Station lot at 7100 Georgetown Rd. The officer recognized the plate from a suspect vehicle involved in criminal activity earlier in the week. The officer requested additional units to respond. Another one year veteran and academy classmate of the primary officer was already riding with him. 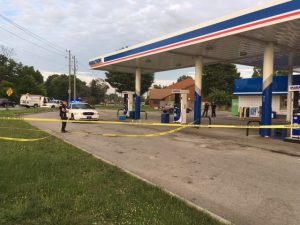 Additional officers arrived on scene and they approached the driver. The driver became very belligerent and would not identify himself. He began rolling up his window, which had a dark tint, ignoring the officers’ commands. Officers broke the window and fired pepper ball rounds into the vehicle in an effort to gain compliance. The passenger in the vehicle then got out of the vehicle and the suspect sped off at a high rate of speed and turned south onto Georgetown Rd.

Officers immediately began to pursue the fleeing vehicle south on Georgetown Rd. After a short distance on Georgetown Rd, the suspect made a U-Turn and began firing at the pursuing officers. That is when the officer who initiated the stop was struck by gunfire, through his lower right ankle, and also suffered a likely graze wound to the back of his head. The officer riding with him was struck and injured by debris and did not require any medical attention. The pursuit continued and eventually ended on the city’s east side near Rural St and Newton St. At the conclusion of the pursuit the suspect, again, fired at officers and several IMPD officers returned fire, killing the suspect.

The officer who was shot received immediate first-aid treatment from his fellow officer and classmate that was in the car with him. Drawing from her training in first-aid, she immediately located a tourniquet and applied it to the officer’s injured leg, preventing massive blood loss. The officers involved applied their training and experience to not only help one another, but to assist in the safety of other officers and the community. The injured officer was transported by EMS personnel to Methodist Hospital in stable condition. 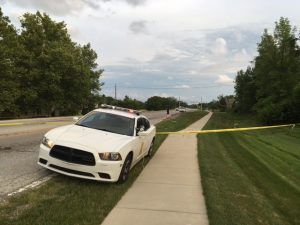 The shooting is being investigated by IMPD’s Critical Incident Response Team (CIRT). A separate and independent internal investigation will be conducted, as is standard procedure in an officer involved shooting.   At this early point in the investigation, detectives were able to confirm that the suspect was armed and that a firearm was recovered from the scene.  The Marion County Prosecutor’s Office is involved and will be consulted throughout the investigative process. All involved officers will be placed on Administrative Duty pending the conclusion of the investigation. IMPD’s wellness program will also be involved to address any concerns from officers involved in the incident.

IMPD would like to take this opportunity to again thank the community for their support and extend a special thank you to the organizations (FOP #86, Father’s House Church in Indianapolis, the Indianapolis Colts, WellPoint/Anthem), that put together the trauma packs, which was put into use by officers in this incident. Anyone with information about this incident is encouraged to contact Crime Stoppers of Central Indiana at (317)262-TIPS(8477). All tips given via Crime Stoppers are considered anonymous.

I play on the radio from 7 am -1 pm weekdays on 98.9 FM WYRZ and WYRZ.org. Follow me on twitter @WYRZBrianScott or e-mail me at brian@wyrz.org.
Previous DNR Law Enforcement Director to serve on Indiana Accreditation Board
Next Driver Loses Control on Wet Pavement and Strikes Trees in Vigo County