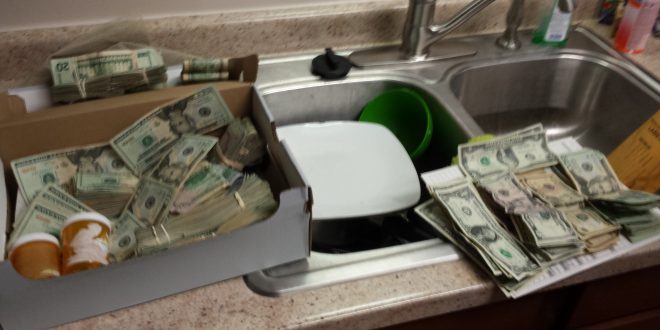 On October 22, 2016, just after 9:00 a.m., Northwest Narcotics/Vice detectives were contacted by the DEA and U.S. Postal service reference packages of marijuana and cash being shipped through the mail.  Utilizing investigative techniques detectives were able to set up a buy/take down on the suspects.  The Investigation led to an apartment in the 5800 Block of Bywood Drive.

During the search, detectives recovered:

50-year-old Dwayne Tubbs, 33-year-old Jeremy Martin, and 32-year-old Kelsey Henderson were all arrested for Dealing Narcotics and Possession of Narcotics.  All three were arrested and transported to the Arrestee Processing Center and face preliminary charges.  The Marion County Prosecutor’s Office will review the case and make a final charging decision. This mission was only possible because of networking, and the willingness of Federal, State, and Local partners.

It is critical that the police and community continue to work together on fighting these issues in Indianapolis.  Anyone with information regarding narcotics or illegal activity is encouraged to call Crime Stoppers of Central Indiana at 262-TIPS (8477), (800) 222-TIPS (8477), or submit an online tip at www.CrimeTips.org.  Information given through Crime Stoppers is considered anonymous.  The IMPD appreciates your support and efforts in helping to create and maintain a safer Indianapolis in which to work and live.

I play on the radio from 7 am -1 pm weekdays on 98.9 FM WYRZ and WYRZ.org. Follow me on twitter @WYRZBrianScott or e-mail me at brian@wyrz.org.
Previous IMPD Homicide detectives are on the scene of a body located on the city’s southeast side
Next Indiana Receives $1.3 Million Grant to Expand Apprenticeship Programs