Indianapolis Metropolitan Police Department (IMPD) investigators are investigating a fatal crash that has killed one man and injured three others.

Just after 5:30 a.m., IMPD officers were dispatched to the 5300 block of West 46th St. on a serious crash.  When officers arrived, they found an unidentified and unresponsive man who was pronounced deceased by EMS personnel.  Inside his vehicle, they found two passengers suffering from only minor injuries.  Those passengers were transported to Eskenazi Hospital in good condition.  The driver of the second vehicle, identified as Anderson Hernandez-Garci, 20, of Indianapolis suffered only minor injuries and was last listed in good condition. 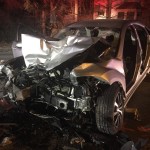 I play on the radio from 7 am -1 pm weekdays on 98.9 FM WYRZ and WYRZ.org. Follow me on twitter @WYRZBrianScott or e-mail me at brian@wyrz.org.
Previous Elizabeth Griffin Promoted to South Zone Drug Unit Supervisor
Next Focus on Transit in 2015 Propels Plans Forward