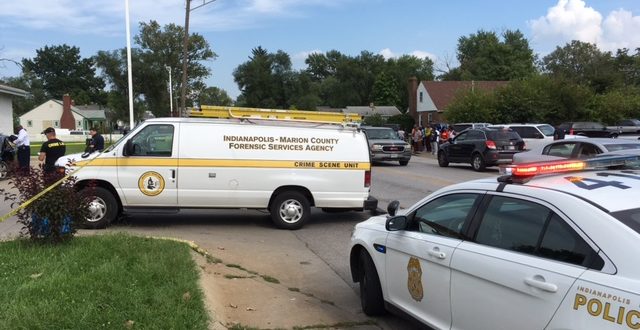 INDIANAPOLIS – Indianapolis Metropolitan Police Department (IMPD) homicide detectives are investigating after a man is shot and killed in a gas station parking lot on the city’s northeast side.

Officers with the IMPD were patrolling the area of 34th and Sherman Dr just after 3:30 p.m. when they heard multiple shots fired. They began checking the area and immediately located a person that had been shot, down between the pumps in the Shell gas station parking lot at 34th and Sherman Dr. IMPD officers acted quickly and were able to safely detain a person of interest without incident. The victim, 29-year-old Michael Johnson of Indianapolis, had suffered at least one gunshot wound and was pronounced dead on-scene by EMS personnel.

After being questioned by detectives, they arrested and preliminarily charged 27-year-old James Holder with murder. James was taken into custody immediately following the shooting and brought to IMPD Headquarters for questioning. Allegedly James shot and killed the victim after the victim had robbed him. Currently, the suspect is being held at the Arrestee  Processing Center. The Marion County Prosecutor’s Office will review the case for charging decision.

Homicide detectives responded and are currently interviewing witnesses. Anyone with information regarding this incident is urged to contact Crime Stoppers of Central Indiana at (317)262-TIPS (8477).

I play on the radio from 7 am -1 pm weekdays on 98.9 FM WYRZ and WYRZ.org. Follow me on twitter @WYRZBrianScott or e-mail me at brian@wyrz.org.
Previous Sullivan County Man Arrested on Child Molestation Allegations
Next Female who assaulted a police officer during a shoplifting incident at a local grocery store has been arrested