INDIANAPOLIS- On Thursday, November 10, 2022, just before 12:00 p.m., IMPD North District officers responded to 3415 Grant Ave. for a report of a person shot.   Officers arrived and located an adult female with injuries consistent with a gunshot wound.  Indianapolis Emergency Medical Services responded to the scene and transported the female to a local hospital in critical condition. Despite life-saving techniques, the female was pronounced deceased shortly after arriving at the hospital.

Initial responding officers were able to identify a vehicle which had fled from the scene.  They located the vehicle a few miles away and an adult male, later identified as Lee-Anthony Hubbard, was located with injuries consistent with a gunshot wound.  He was transported to a local hospital in stable condition.

IMPD Homicide detectives responded to the scene and began their investigation.

Homicide detectives received information that indicated those involved in this incident were known to each other. Detectives believed all parties involved were accounted for and there is no immediate threat to the community.

The investigation continued and detectives were able to identify Hubbard as a suspect in the incident. Thanks to the outstanding work by North District officers, Hubbard was arrested without further incident for murder.

The Marion County Prosecutor’s Office (MCPO) will review the case and make the final charging decision.

Anyone with information about this incident should contact Detective Michael Condon at the IMPD Homicide Office at 317.327.3475 or by e-mail at Michael.Condon@indy.gov

An arrest is merely an accusation. The suspect is presumed innocent unless and until proven guilty in a court of law.

I play on the radio from 7 am -1 pm weekdays on 98.9 FM WYRZ and WYRZ.org. Follow me on twitter @WYRZBrianScott or e-mail me at brian@wyrz.org.
Previous Hendricks Humane Society Event Exceeds Goal
Next Hendricks County Community Foundation Announces New Community Calendar 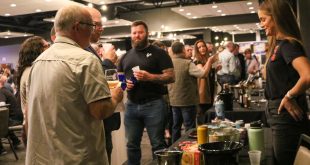