INDIANAPOLIS – Detectives have arrested 35-year-old Hardy Stepp of Indianapolis on two counts of robbery and one count of theft for his allege involvement in several area purse grab robberies.  The suspect was taken into custody on yesterday evening at the McDonalds located at Lafayette Road and West 38th Street without incident.  The suspect is currently being held at the Arrestee Processing Center awaiting his next hearing date. 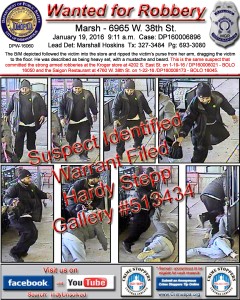 Detectives urge anyone with further information about this incident is urged to call Crime Stoppers of Indiana at (317) 262-TIPS (8477).

I play on the radio from 7 am -1 pm weekdays on 98.9 FM WYRZ and WYRZ.org. Follow me on twitter @WYRZBrianScott or e-mail me at brian@wyrz.org.
Previous ISP Investigating Possible Stolen Vehicle Crash on I-465
Next Sullivan County Rear End Crash Injures One