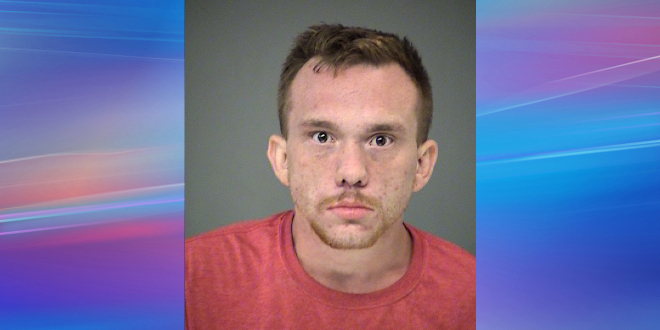 INDIANAPOLIS-Indianapolis Metropolitan Police Department (IMPD) identified and arrested a man for allegedly striking an officer with his vehicle while stealing items from a Walmart store.

Just before 5:45 p.m., on August 17, 2019, Officers of the IMPD officers were dispatched 4650 S. Emerson Ave to assist an off-duty officer.  An off-duty IMPD officer was working at the Walmart assisting with security when he attempted to apprehend a shoplifter.  During this time, the suspect struck the officer with his vehicle and fled the scene in a silver colored four-door sedan.  The officer was transported to a local hospital with minor injuries and later released.

Detectives reached out to the community earlier in the month for their assistance. Through tips and information provided to the detectives from the community, detectives identified and arrested 31-year-old Cody Amos for his involvement in this incident.

We continue to encourage anyone with information about this incident to contact Detective Carroll at 317-327-6331 or Crime Stoppers of Central Indiana at 317.262.8477 or (TIPS).  Citizens can also download the mobile P3tips app for Apple or Android phones to submit a mobile tip, or go to www.CrimeTips.org to submit a web tip. You will remain anonymous and may be eligible for a cash reward of up to $1000 if the information leads to a felony arrest.  Only tips submitted directly and anonymously to Crime Stoppers are eligible for these cash rewards.

I play on the radio from 7 am -1 pm weekdays on 98.9 FM WYRZ and WYRZ.org. Follow me on twitter @WYRZBrianScott or e-mail me at brian@wyrz.org.
Previous Indiana State Police K-9 Teams Receive New Safety Equipment
Next UPDATE – Missing Woman Located and is Safe