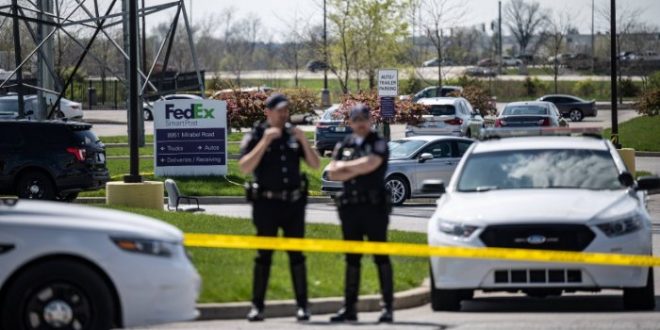 INDIANAPOLIS – The Indianapolis Metropolitan Police Department (IMPD) along with our federal partners, The Federal Bureau of Investigation and the U.S. Attorney’s Office Southern District of Indiana today announced they have completed the investigation into the shooting at the FedEx Ground-Plainfield Operation Center, 8951 Mirabel Rd.

Following the April 15, 2021 shooting, which took the lives of eight workers and injured five others, investigators worked diligently to collect evidence and intelligence to determine the motives into this criminal act. At this time, based on the evidence gathered to date, it has been determined that the 19-year-old shooter acted alone in this incident.

Investigators have found no one else was involved or had prior knowledge of the incident. The shooter’s attack did not appear to have been motivated by the need to address perceived injustices or to advance an ideology but was an act of suicidal murder. This is a term intended to convey the murders were a function of a primary desire for suicide. The IMPD and FBI considered all factors for this attack, including if it was racially or ethnically motivated. After conducting an exhaustive investigation and review of all evidence – to include digital media – no indication of racial bias was found to have played a part in this horrific tragedy.

To date, investigators have taken the following steps:

– Over 120 interviews were conducted by detectives between each of the investigating agencies.

– More than 20 search warrants, subpoenas, and federal grand jury subpoenas were issued and served throughout the investigation.

– There were over 150 pieces of evidence were collected throughout the investigation.

– More than 100 IMPD officers, detectives, federal agents and assisting agencies responded to the scene on April 15th and 16th.

Immediately prior to the shooting, IMPD investigators learned that the shooter entered the FedEx building and spoke with security. He exited out of the facility and returned to his vehicle in the parking lot and recovered two weapons, later identified as a Ruger AR-556 and a HM Defense HM15F. While the shooter was walking back to the employee entrance, he shot and killed one employee outside.

He then re-entered the business for a second time and immediately began firing his weapons at employees inside the entry area. At that point, the shooter was unable to go further into the facility but fired several shots at victims beyond the security gate. The shooter then exited the building and continued shooting in the parking lot, striking several more victims. The suspect re-entered the business a final time and took his own life.

During this incident, an employee was able to recover a personal gun from his vehicle and fired a round at the shooter in the parking lot, then fled the area for safety and called 911.

“This was a call that no police department, no agency, no law enforcement officer ever wants to respond to. While this concludes our investigation, we will always remain focused on what is most important: the eight members of our community who lost their lives because of this senseless act,” said IMPD Chief Randal Taylor said.

IMPD and FBI Indianapolis requested the assistance of the FBI’s Behavioral Analysis Unit (BAU), based in Quantico, Virginia, to help in the investigative team’s effort to determine the shooter’s motivation for the attack. The BAU provides investigative support and post-attack behavioral analysis of mass violence. BAU analyzed information and evidence gathered throughout the investigation and assessed the attack was an act of suicidal murder in which the shooter decided to commit suicide in a way he believed would demonstrate his masculinity and capability while fulfilling a final desire to experience killing people.

Based on interviews and documents reviewed by investigators in the months prior to the attack, the shooter’s suicidal thoughts occurred almost daily, and he had attempted suicide on more than one occasion. The shooter had no previously diagnosed mental illness but had struggled with mental health stressors throughout his life.

It was determined the shooter considered other targets for an attack but chose the FedEx location because he was familiar with it and the pattern of activity at the site. He also believed he had identified a vulnerability that would give him unobscured access to many potential victims.

FBI studies have found 73% of attackers had a previous connection with the target location. Preparation for the shooter’s attack began at least nine months prior but it is unclear when the FedEx location was chosen as his primary focus.

“Only the shooter knows all the reasons why he committed this horrific act of violence. However, at this time, the FBI is confident that, based on the evidence collected, the assessment of the Behavioral Analysis Unit is accurate and the shooter did not appear to have been motivated by bias or a desire to advance an ideology,” said FBI Indianapolis Special Agent in Charge Paul Keenan.

The U.S. Attorney’s Office also was a crucial part of the investigation. “We would first like to express our continued condolences to the victims and their families and friends, of this horrific event. Although an important step, we recognize that no increased understanding of this cowardly act in any real way lessens the trauma experienced by those victims,” said John Childress, Acting United States Attorney for the Southern District of Indiana

“The U.S. Attorney’s Office would like to thank its law enforcement partners in this investigation. The men and women of the Indianapolis Metropolitan Police Department, Federal Bureau of Investigation and other supporting agencies have again demonstrated their integrity and professionalism during this difficult time,” Childress added.

Additionally, the U.S. Attorney’s Office joins with its law enforcement partners in the conclusion that the shooter was primarily driven by a desire to commit both suicide and murder, compounded by existing mental health issues.

Lastly, IMPD would like to thank the various local, state and federal agencies who responded to the scene and came together in a unified effort.

“We also want to thank the community for their support during the response and investigation. Our hearts go out to the victim’s families and colleagues, along with the surviving victims, whose lives have been forever changed,” added Chief Taylor.

I play on the radio from 7 am -1 pm weekdays on 98.9 FM WYRZ and WYRZ.org. Follow me on twitter @WYRZBrianScott or e-mail me at brian@wyrz.org.
Previous Indiana Law Enforcement Academy in Plainfield Suspends Classes Due to COVID Outbreak
Next State Accepting Applications for Teaching Scholarship, Stipends