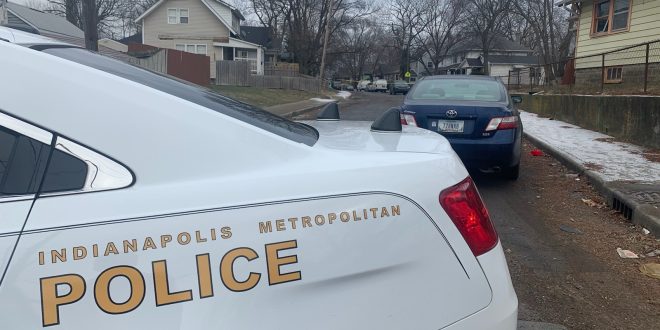 Indianapolis Metropolitan Police Department (IMPD) detectives identified and arrested a juvenile on Thursday, January 27, 2022 for his alleged involvement in a shooting that occurred in the 2900 block of E 19th Street.

On Thursday, January 27, 2022, just after 1:30 p.m., detectives with the Indiana Crime Guns Task Force were working a separate investigation when they observed two juveniles approach a vehicle and one juvenile fired a gun. Detectives requested additional assistance and as they began to approach the two juveniles they allegedly fled on foot. Both juveniles ages 15 and 16 were apprehended minutes later without further incident.

A juvenile male victim was located inside the vehicle suffering from injuries consistent with a gunshot wound. Detectives provided first aid to the victim until IEMS arrived on scene. The victim was transported to an area hospital in critical condition.

Officers also located a toddler inside the vehicle who was uninjured.  Officers provided care to the toddler until DCS could respond and take custody of the toddler.

Victim’s assistance was on-scene to provide resources to people involved or related to the victim.

Aggravated Assault detectives responded to the scene and began their investigation. The 15-year-old juvenile complained of chest pain and was transported to an area hospital for medical evaluation and was released into officer’s custody. The Indianapolis-Marion County Forensic Services Agency responded to assist in identifying and collecting potential forensic evidence.

Anyone with information about this incident should contact Gregory Taylor at the IMPD Homicide Office at 317.327.3475 or e-mail him atGregory.taylor2@indy.gov.

Alternatively, they can call Crime Stoppers of Central Indiana at 317.262.8477 or (TIPS).  Citizens can also download the mobile P3tips app for Apple or Android phones to submit a mobile tip, or go to www.CrimeTips.org to submit a web tip. You will remain anonymous and may be eligible for a cash reward of up to $1000 if the information leads to a felony arrest.  Only tips submitted directly and anonymously to Crime Stoppers are eligible for these cash rewards.

An arrest is merely an accusation.  The suspect is presumed innocent unless and until proven guilty in a court of law.

The Marion County Prosecutor’s Office will make the final charging decisions. The juvenile involved in this case is considered innocent unless and until proven guilty in a court of law.

I play on the radio from 7 am -1 pm weekdays on 98.9 FM WYRZ and WYRZ.org. Follow me on twitter @WYRZBrianScott or e-mail me at brian@wyrz.org.
Previous Farmersburg Man Arrested for DUI with Three Children in the Vehicle
Next IMPD Homicide Detectives Make Arrest in Overnight Homicide