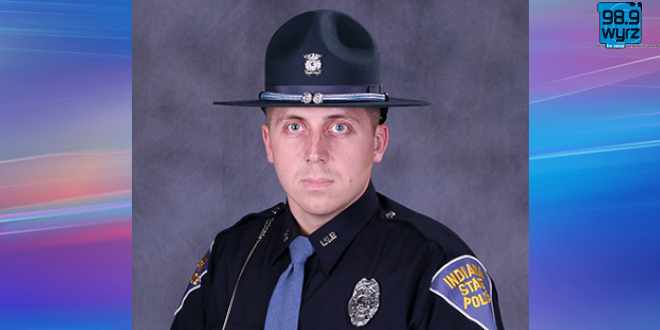 While on a normal patrol, Trooper Stump was traveling westbound on Cherry Street over the Wabash River bridge when he discovered a man collapsed over the concrete barrier of the bridge, facing the river, and with his feet off of the ground.  Trooper Stump took immediate action, stopping and exiting his patrol car, carefully approaching the man.  He attempted to engage in conversation, yet he received no response.  Trooper Stump then quickly advanced towards the man.  Seeing that he was unresponsive, Trooper Stump physically lifted him from the concrete barrier and placed him on solid ground.  It was at this time that the man became responsive and finally acknowledged the inquiry of Trooper Stump.

Due to the cold weather, Trooper Stump placed the man into his patrol car for warmth.  Further questioning and investigation by Trooper Stump revealed that the man was under the influence of alcohol and controlled substances.  Communication continued between the two and Trooper Stump was able to positively convince the man to be self-admitted into a medical facility for care and treatment, allowing for proper mental and medical care. The man was then transported to a local hospital by medics of the Terre Haute Fire Department.

The Indiana State Police understands that in a crisis the mental well-being of individuals is as essential as physical well-being. The immediate and selfless actions demonstrated by Trooper Stump proved to be crucial in saving a man’s life.  Through those actions, proper mental and medical care for recovery will be supplied.

I play on the radio from 7 am -1 pm weekdays on 98.9 FM WYRZ and WYRZ.org. Follow me on twitter @WYRZBrianScott or e-mail me at brian@wyrz.org.
Previous November Indiana Employment Report
Next US 136 and State Road 75 in Jamestown becomes a four-way Stop