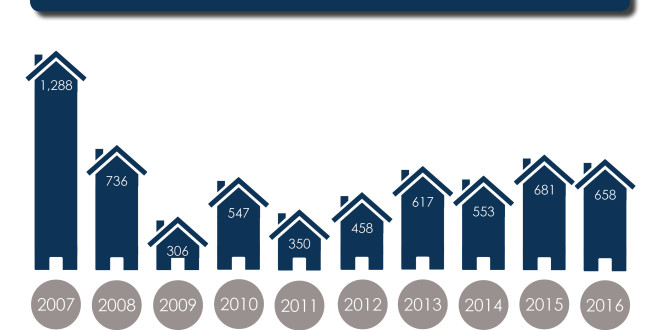 INDIANAPOLIS, Ind. – Single-family building permits in Indiana decreased 3 percent in January compared to the same time last year according to the latest data from the U.S. Census Bureau and the Department of Housing and Urban Development. Permits decreased 21 percent in January over the previous month.

The National Association of Home Builders/Wells Fargo Housing Market Index was 58 in February, still well above the tipping point of 50 and three points above last February but down from a recent peak of 65 in October 2015. Builders reported more consumer concern over the price of new homes relative to existing homes as builders face higher costs for labor, land and materials.

“Builders are being cautious as they face some market uncertainties and a shortage of available lots and labor,” said Wajda. “We are confident that pent-up demand and an improving economy will help grow the housing market.” 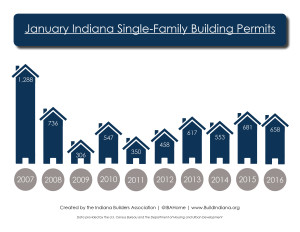 I play on the radio from 7 am -1 pm weekdays on 98.9 FM WYRZ and WYRZ.org. Follow me on twitter @WYRZBrianScott or e-mail me at brian@wyrz.org.
Previous Lt. Governor Ellspermann announces $14.3 million in Rental Housing Tax Credit allocations for 18 affordable housing developments
Next Governor Pence Names Rick Hite as Executive Director of Indiana Civil Rights Commission