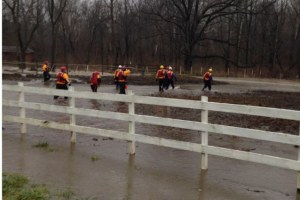 Brownsburg Fire Territory was called to 6310 E. CR 350 N, Brownsburg, IN for horse rescue. Upon arrival crews found over a dozen horses in the property owners pasture surrounded by water. The horses were on a higher level of ground with the creek on one side and a drainage ditch filled with water approximately 6 feet deep on the other.  No horses were injured and they showed no signs of distress. However, there were concerns of the rising water and hypothermia for the horses. The property owner had already removed three horses before the water became two high to continue on their own.

Initial attempts to remove the horses failed when the horses refused to leave the area. Hendricks County Rescue Task Force swift water rescue crews from Brownsburg, Plainfield, Danville, Avon and Morgantown Large Animal rescue team made a second attempt and were able to get two horses to cross the 6 foot deep area.  Once these horses crossed the other horses began to follow.  The horses went to an area closer to the road away from the creek and then able to be taken to the barn to be warmed.  Overall this was a successful rescue with no injuries.

During the incident one person was arrested after interfering with rescue operations and placing himself in danger. This person entered the rescue area and did not acknowledge the commands to come back until the property owner advised him of trespassing.  This interference put his life at risk and took away resources from the initial rescue to mitigate his interference.