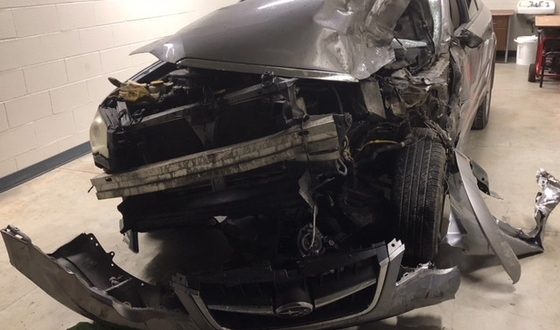 Preliminary investigation revealed a flagger was stopping southbound traffic near the address for pavement resurfacing. A 2008 Ford F150 stopped for the flagger, as did a 1995 Ford Crown Victoria. A third vehicle, 2008 Subaru Outback, failed to stop, sideswiped the Crown Victoria, struck the Ford F150 and lastly, struck the flagger.

The flagger, Danny K. Harrington, age 53, of Terre Haute, IN. was critically injured and airlifted by StatFlight to St. Vincent’s Hospital in Indianapolis for treatment. Harrington worked for Wabash Valley Asphalt.

The driver of the Subaru Outback was 52-year-old Jessie D. Parks of Cloverdale, IN. She complained of pain and was treated/released from Putnam County Hospital. Preliminary toxicology results indicated positive for marijuana and a BAC of .10%. She will be incarcerated in the Putnam County Jail this evening, on various charges, following the investigation with ISP. Alcoholic beverage containers were visible inside her car.

I play on the radio from 7 am -1 pm weekdays on 98.9 FM WYRZ and WYRZ.org. Follow me on twitter @WYRZBrianScott or e-mail me at brian@wyrz.org.
Previous Donnelly, Peters, Gillibrand Introduce Legislation to Help Workers Who Lose Their Jobs to Automation
Next Take these precautions to prevent recreational water illnesses and injuries