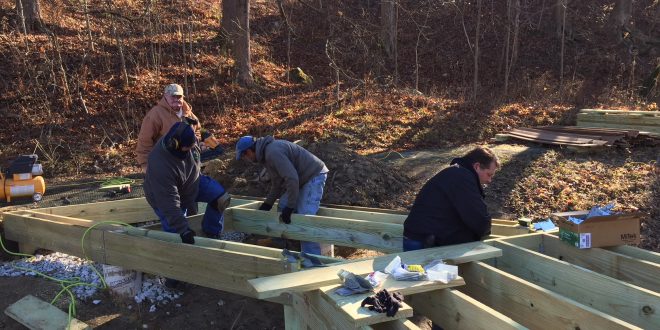 Holtsclaw is the only full-time employee on this crew charged with maintaining 232 acres at McCloud, 210 acres at Sodalis, and 4.5 miles of the Vandalia Trail. McCloud and Sodalis also include 10 miles of trails throughout their combined 442 acres.

Two regular volunteers, Gene Ardeel and Kurt Steuer, each spend about 8 hours a week helping the county employees keep up with this monumental task.

Holtsclaw says that his favorite part of his job is having a tangible, justifiable outcome at the end of the day that benefits other people.

In addition to keeping the parks mowed and cleared of fallen trees, Holtsclaw and his team built an arboretum, an observable live honeybee habitat, foot bridges, a boardwalk and observation decks in the new wetland habitat at McCloud Nature Park in 2017. They also built a new interactive exhibit inside the McCloud Nature Center, plus they constructed and maintained the popular McCloud Prairie Maze, as they do every fall.

“I don’t pay anybody to do anything that I can do for myself,” said Holtsclaw. And with his degree in Recreation, Parks and Tourism Administration from Western Illinois University and his extensive experience in construction, landscaping, and computer science, there isn’t much that he can’t do.

That has translated into thousands of dollars in savings to taxpayers in 2017.

Construction of the interactive exhibit within the Nature Center was estimated to be a $50,000 job, had it been contracted out. Instead, the maintenance team and volunteers spent about $1,300 in materials to build the custom display case, including the electrical work. Holtsclaw built and programmed the sound boards as part of the new exhibit, and Ardeel created a beautiful and functional new glass-encased home for the Nature Center’s resident black rat snake, Oboe, that stands next to the exhibit.

The maintenance team is currently putting the final touches on the new 300-foot-long boardwalk and observation decks that will allow park visitors to walk directly into the middle of the new wetland habitat at McCloud Nature Park without disturbing any of the plants and wildlife there.

Contracted out, this project was estimated to cost up to $75,000. Holtsclaw and his crew spent less than $17,000 on materials, and the boardwalk is built to last at least 20 years.

Over the 11 years that Holtsclaw has served as Park Manager for HCP&R, the savings to taxpayers are immeasurable. He and his maintenance teams have built most of what visitors see and use at McCloud Nature ark.

At Sodalis Nature Park, they have constructed all of the trails, the nature viewing platform, the ADA-accessible fishing pier, and the bridge at the front of the park that leads to the hiking trails, to name just a few projects.

They’ve done extensive work on the Vandalia Trail, and their cost-saving skills will be put to use again in 2018 during the construction of W.S. Gibbs Memorial Park in Washington Township.

“With such a small group, it sometimes takes awhile to finish a project that would quickly be completed by a full construction crew,” said Holtsclaw. “But we save taxpayers a whole lot of money.”

I play on the radio from 7 am -1 pm weekdays on 98.9 FM WYRZ and WYRZ.org. Follow me on twitter @WYRZBrianScott or e-mail me at brian@wyrz.org.
Previous Electric cooperative to sponsor student for D.C. trip
Next Brownsburg police investigating Sunday death of 74 year old woman