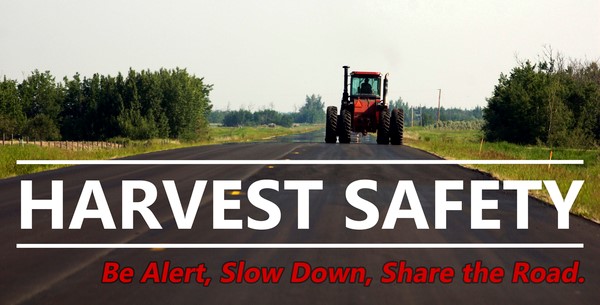 It’s harvest time: All drivers should watch out for slow-moving farm equipment

INDIANAPOLIS (Sept. 19, 2016) – With harvest season officially underway, motorists should expect to see more slow-moving farm equipment from Indiana’s 57,700 farming operations on Hoosier roadways. Lt. Governor Eric Holcomb and the Indiana State Department of Agriculture (ISDA), Indiana Department of Homeland Security (IDHS), Indiana State Police (ISP), Indiana Department of Transportation (INDOT), as well as the Bureau of Motor Vehicles (BMV), are teaming up for the Be Alert, Slow Down, Share the Road campaign to bring attention to the need for more safety on Indiana’s rural roads.

“Now that harvest season is underway, Hoosiers can expect to see an increase in slow-moving farm equipment on Indiana roadways,” Lt. Governor Holcomb said. “This harvest season we are asking all motorists to be alert, slow down and share the road with our Hoosier farmers, especially in rural areas. Our goal is to reach every Hoosier with this important safety message in an effort to protect farmers and drivers across the state.”

According to the National Highway Traffic Safety Administration, farm equipment vehicles (excluding trucks) were involved in 93 fatal crashes across the U.S. In an effort to be proactive, Indiana’s state agencies have once again partnered together to raise awareness about the importance of rural roadway safety. This announcement also comes during National Farm Safety and Health Week, which is a national effort designed to promote safe and healthy practices on farms and ranches across the country.

“As the tenth largest farming state in the nation, harvest season is a busy time of the year for Indiana,” said Ted McKinney, ISDA Director. “With farmers bringing in this year’s crop, we want to encourage all Hoosiers to be mindful and alert for farm equipment on the roads. By allowing a little extra time for travel, motorists can reach their destinations and farmers can get their work done without incident or injury.”

The following tips are part of the Be Alert, Slow Down, Share the Road campaign and will help ensure the safety of motorists, passengers and operators of slow-moving equipment:

“Five seconds is the time it takes to close a gap the length of a football field between a car driving 55 mph and a tractor going 15 mph,” said John Erickson, IDHS Director of Public Affairs. “Distracted driving is one of the leading causes of vehicular injuries, and with more slow-moving vehicles on Indiana’s roadways, it’s important for Hoosiers to take their time, exercise caution and avoid distractions – such as using a cell phone while driving.”

By state law, farm equipment must have the nationally designated slow-moving vehicle sign – a red triangle-shaped reflector – to warn oncoming drivers that their equipment is on the road. These vehicles often travel at speeds no higher than 25 mph.

Indiana State Police Superintendent Doug Carter said, “This is the time of year that all drivers, be they of automobiles or farm equipment, must be attentive and share the road.” Supt. Carter continued, “Whether you’re a farmer or a regular commuter, the goal is for everyone to go home at the end of the day to enjoy dinner with their family that was made possible by the farmer you just shared the road with.”

As a new effort this year to further educate motorists, BMV has provided driving schools across the state with educational resources on the topic of rural roadway safety. Instructors will now be able to use these materials, developed by ISDA, to create lesson plans and incorporate into the classroom – not just during harvest season, but throughout the year as well.

“Just as surely as the leaves will turn, farm equipment will be sharing our rural roadways during the coming weeks of harvest season,” said Kent Abernathy, BMV Commissioner. “I urge all drivers to be extra careful and watch your speed to keep both farmers and motorists safe.”

A U.S. Census Bureau survey claimed that an estimated 19 percent of the U.S. population lived in rural areas in 2014. Despite this information, over half of all traffic fatalities nationwide occurred in rural areas.

“Farm equipment can be larger, heavier and slower than it appears from a distance,” said INDOT Commissioner Brandye Hendrickson. “Drivers should allow extra room and reduce their speed immediately when seeing farm equipment ahead. Be cautious in rural areas where farm equipment may not be seen easily, such as hills, curves and intersection corners not yet harvested.”

I play on the radio from 7 am -1 pm weekdays on 98.9 FM WYRZ and WYRZ.org. Follow me on twitter @WYRZBrianScott or e-mail me at brian@wyrz.org.
Previous State Agencies, Colleges Combine Efforts to Help Hoosiers Affected by ITT Technical Institute Closure
Next Donnelly: Agreement with Israel Critical to Security of Both of our Countries